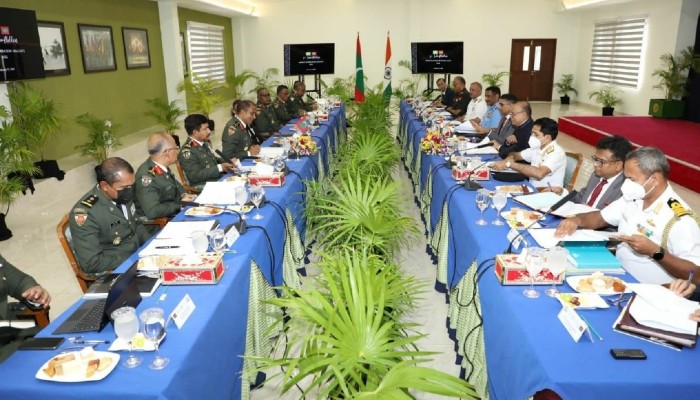 The 3rd Defence Cooperation Dialogue between India and Maldives was held on Sunday.

India and Maldives discussed joint efforts and capacity building measures to counter transnational crimes and enhance security in the region at the 3rd Defence Cooperation Dialogue held in Male on Sunday.

The High Commission of India in Maldives in a Twitter post said that the meeting was co-chaired by India’s Defence Secretary Ajay Kumar and Maldives Chief of Defence Force Major General Abdulla Shamaal.

During the meeting held at the Ministry of Defence in Male’, discussions focused on the immense and expanding India-Maldives defence cooperation in the past three years, it stated.

The Maldivian Minister thanked India for the immense assistance during the Covid pandemic with vaccine shipments, medical supplies, transportation of food supplies, humanitarian assistance and technical support for MNDF, with more than 170 medical evacuations and 130 surveillance missions conducted in the past couple of years, the statement said.

Defence Minister Didi expressed her deep appreciation for the Coast Guard Dockyard project, which is set to be the most comprehensive defence infrastructure development project carried out in Maldives, it added.

According to the statement, Indian Defence Secretary Ajay Kumar noted that the Government of India was committed to further boosting India-Maldives partnership.

Since 1988, defence and security has been a major area of cooperation between India and Maldives, says the Indian High Commission in Maldives website on ‘India-Maldives Bilateral Relations’.

India has adopted a very flexible and accommodating approach in meeting Maldivian requirements of defence training and equipment, it states.

According to the Indian High Commission website, India provides the largest number of training opportunities for the Maldivian National Defence Force (MNDF), meeting around 70% of their defence training requirements.

A Comprehensive Action Plan for Defence was also signed in April 2016 to consolidate defence partnership, it mentions.

In November last year, Maldives Defence Minister Didi on a visit to India had said New Delhi’s assistance for Maldivian defence forces is especially critical to increase our professionalism, operational capacity and expand our capabilities.