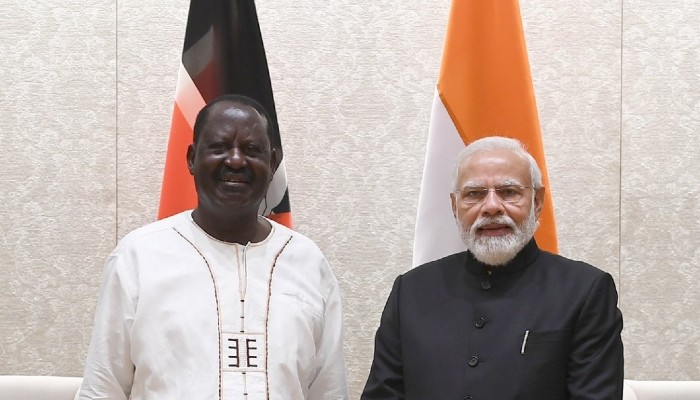 Prime Minister Narendra Modi on Sunday met with former Kenyan Prime Minister Raila Amolo Odinga who is in India on a private visit and expressed his commitment to further strengthening India-Kenya relations.

Prime Minister Modi expressed his happiness at being able to meet Odinga after almost three-and-a-half years, the statement said.

The Indian Prime Minister recollected his multiple interactions with Odinga since 2008 in both India and Kenya, as well as the latter’s support to the Vibrant Gujarat Summit in 2009 and 2012. The two leaders also discussed other issues of mutual interest, the statement added.

India and Kenya are maritime neighbours with robust and multi-faceted partnership, marked by regular high-level visits, increasing trade and investment and extensive people to people contacts.

In the joint statement issued by the two countries during EAM S Jaishankar’s visit, the two sides hailed the cordial and historic relations between the two countries, underpinned by common values and strong people-to-people links dating back many centuries.

Jaishankar had then emphasized that India’s approach was guided by the 10 principles of engaging Africa, enunciated by PM Modi in July 2018. Africa’s priorities would continue to be the paramount factor in India’s bilateral cooperation, he said