Will work together to give shape to Quad’s positive agenda as force for global good: Jaishankar 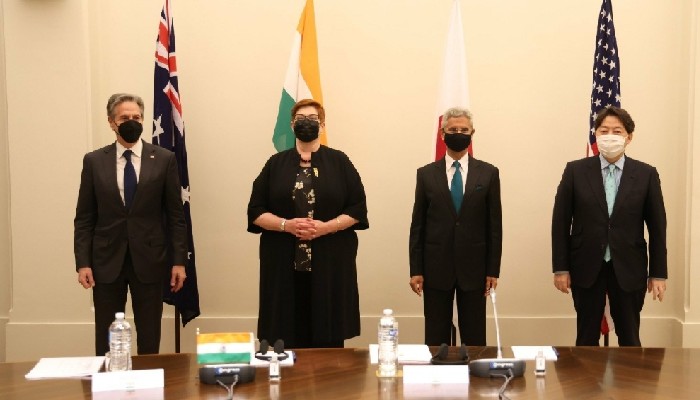 The Secretary of State of the United States and Foreign Ministers of Australia, India and Japan.

The fourth Quad Foreign Ministers Meeting was held in Melbourne, Australia on Friday

External Affairs Minister S Jaishankar on Friday said that he along with his Quad counterparts will work together to give shape and substance to its positive agenda as a force for global good.

“We will work together to give shape and substance to the Quad’s positive agenda to make it in words of my Prime Minister, ‘a force for global good,” said Jaishankar addressing the Quad Foreign Minister’s Meeting Press Conference in Melbourne, Australia.

Jaishankar and his counterparts also had the opportunity earlier in the day to meet collectively with Australian Prime Minister Scott Morrison in what was a ‘very insightful, useful discussion’ before their own.

“The interactions that we have had, has made it was evident that robust bilateral relations between our respective countries, strategic convergences and our shared democratic values have all combined to make the Quad a vibrant and substantial framework,” Jaishankar stated.

“We are building an agenda which seeks to further our shared collective vision of a free, open and inclusive Indo-Pacific,” he stated.

“We are keen to work further to peace and stability and economic prosperity in the Indo-pacific region through collective efforts which address contemporary issues,” the Indian External Affairs Minister noted.

“In this context, we will continue to support our ASEAN partners in their efforts to uphold peace, security and prosperity in the region. Their centrality is important to recognize and reiterate,” he pointed out.

“We reviewed the Quad’s ongoing efforts to combat the Covid-19 pandemic and agreed to expedite delivery of safe and affordable vaccines to support capacity building and to augment infrastructure for last mile delivery,” EAM Jaishankar added.

“I welcome the Quad’s shared desire to address common global threats such as terrorism, strengthen maritime domain awareness, provide timely HADR assistance and assist countries in the Indo-pacific in the area of cyber security,” he said.

“Taking forward the Quad’s positive agenda which our leaders endorsed last year we will take steps to strengthen our people-to-people linkages through education programmes and think-tank dialogues,” he explained.

Meanwhile, replying to a question on imposing sanctions on Junta-regime in Myanmar, Jaishankar said, “We have all agreed on the democratic transition which was underway in Myanmar and the fact that the country has moved in a different direction is something that troubles all of us.”

He stated that, “We all strongly back the ASEAN position and its efforts.”
“However, India as an immediate neighbor, land border neighbor, we have some very specific concerns on Myanmar which also guides our thinking,” Jaishankar stated.

“Concerns about insurgency operating there, as recently insurgents killed a very senior military officer and his family; concerns of Covid-19 and the lack of vaccination along our common border; and concerns of humanitarian situation which is arising on food shortage,” he continued.

“We do not follow a policy of national sanctions,” the External Affairs Minister clarified on the question of imposing sanctions.