‘We have leaders who continue to defend Osama Bin Laden as martyr’: India at UNSC 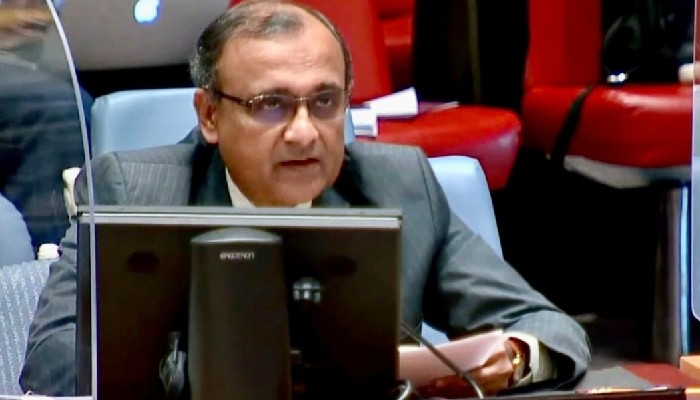 Speaking at the UNSC Briefing on ‘Threat to International Peace & Security Caused by Terrorist Acts’ on Wednesday, India’s Permanent Representative to UN Ambassador TS Tirumurti said that India has long borne the brunt of cross-border terrorism including the 2008 Mumbai terror attack and the 2016 Pathankot terror act.

“As a country that has long borne the brunt of cross-border terrorism, including the 2008 Mumbai terror attack and the 2016 Pathankot terror act, with victims of both these dastardly acts yet to get justice, India is acutely aware of the human cost of terrorism and remains fully committed to bringing the perpetrators of these terror attacks to justice,” he stated.

“We reiterate our firm belief that terrorism in one part of the world is threat to peace and security of entire world, and therefore, while condemning these attacks, our response should be unified, and unequivocal,” India’s envoy to UN told UNSC.

Tirumurti called it a matter of grave concern that the current Secretay General’s report raises serious concerns of ISIL’s continued attempts to revive itself in its core zone as well as expanding and strengthening its affiliates in several countries of Asia and Africa.

“We have been highlighting consistently the threat of terrorism in our neighborhood. These security fears have been further exacerbated by the changed political situation in Afghanistan,” he pointed out.

“The report of the monitoring team is concerning as it highlights that Afghanistan has the potential to become a safe haven for Al-Qaida and a number of terror groups,” India’s Ambassador to UN stated.

“The SG’s report also highlights near doubling of strength of ISIL-Khorasan, following the Taliban’s release of several thousand individuals from prisons,” he mentioned.

“In his 12th report, SG had highlighted that Shahab al-Muhajir, the leader of ISIL-K as having maintained familial ties to the proscribed Haqqani Network as well,” Tirumurti recalled.

“The report of the Taliban Sanctions Committee recognizes the continuation of links between Taliban, especially through the Haqqani Network, and Al Qaida and other terrorist groups in our neighbourhood,” he explaned.

According to Ambassador Tirumurti, it is essential that we don’t lose sight of the ease with which the proscribed Haqqani Network, with support from their patron state, have worked along with prominent terrorist organizations like Al-Qaida, ISIL-K, etc. in South Asia.

“We have been reiterating the close links between proscribed terrorist entities under the 1267 Sanctions regime such as Lashkar-e-Taiba and other terror groups including the Jaish-e-Mohammad,” he told the UNSC.

“However, in spite of repeatedly flagging these concerns, the SG’s report has failed to take notice of these linkages,” Tirumurti regretted.

“We hope that in future iterations of such reports, inputs from all member states would be treated on an equal footing and an evidence based and credible yardstick be applied by its authors,” he argued.

Pointing out that the signs of re-emergence of ISIL/Daesh in Syria and in Iraq call for urgent action by the international community, the Indian Ambassador said, we reiterate that terrorists can neither be defeated by forming alliances with non-sovereign entities nor while pursuing narrow political agendas.

“We need to support regional member states in the implementation of their measures against terrorists and UN designated terrorist groups,” he stated.

Maintaining that in Africa, it is becoming increasingly evident that terrorist groups with linkages to ISIL and Al Qaida are gaining in strength, Tirumurti said they have targeted and killed civilians, especially, women and children, security forces and UN peacekeepers.

“It is heartening to note that countries affected by these terrorist groups are taking measures, both on their own and collectively to counter the threat,” he further stated.

“We commend all these efforts, including that of SADC in Mozambique, Multinational Joint Task Force in the Lake Chad basin and the G5 Sahel Force in the five Sahel Countries. These efforts should be supported by the international community and the UN without any caveats,” Tirumurti told UNSC.

“Today the terrorists’ use of ICT, social media, emerging technologies such as new digital payment methods, encrypted messaging services, cryptocurrencies, crowdfunding platforms, Unmanned Aircraft Systems, etc. pose a dynamic threat for which most of the member states do not have adequate response capabilities,” he said.

“Global expert bodies such as Financial Action Task Force have been raising serious concerns about terrorist financing. We have recently witnessed terror attacks through drones in our neighbourhood and now in UAE and Saudi Arabia, which have been condemned strongly by the Security Council,” the Indian Permanent Representative to UN said.

“The recent Council resolution 2617 takes note of this threat posed by Unmanned Aircraft Systems. We need to work together to develop appropriate solutions and evolve global standards to address these threats,” he added.

Ambassador Tirumurti said that terrorism impacts everyone, irrespective of the place or origin. Unfortunately, it took us decades and then September 11 attacks, to come out of a flawed mindset of treating terrorism based on motivations behind terror acts.

He reiterated External Affairs Minister S Jaishankar’s 8-point action plan in this Council and said that as Chair of Counter Terrorism Committee (CTC), India will work closely with UNOCT and CTED and continue to take up this issue with all stakeholders so that a zero-tolerance approach to terrorism and its perpetrators becomes the norm of the international counter terror discourse.