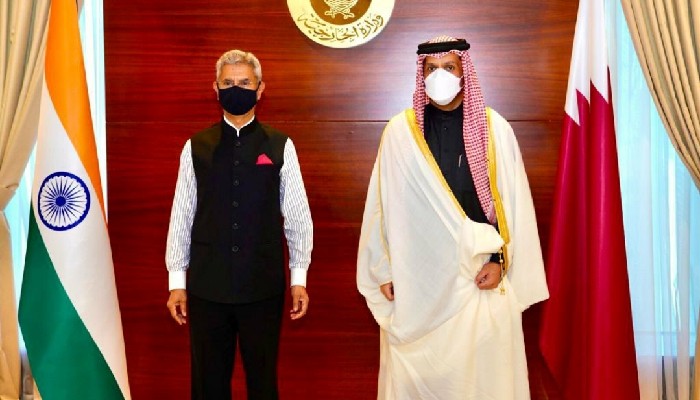 In a tweet about the meeting, Jaishankar said that he held productive talks with Qatar's Foreign Minister and discussed "our broad based political, economic, digital and security partnership".

"Appreciate the interest in expanding investment and trade. Thank Qatari authorities for support extended to the Indian community," his tweet added.

His tweet further said that he also exchanged with the Qatari Foreign Minister views on global and regional developments, including Afghanistan.

In a separate tweet, EAM Jaishankar said that he unveiled the foundation stone of the new Embassy complex in Doha and thanked Al-Thani for gracing the occasion.

The EAM further said in the tweet that he was confident that the new chancery complex will meet the aspirations of the Indian community in Qatar.

Jaishankar had stopped over in Qatar before an official visit to Australia and Philippines beginning on Thursday.

While in Australia from February 10-13, EAM Jaishankar will participate in the 4th Quad Foreign Ministers’ Meeting on Friday in Melbourne, along with the Foreign Ministers of Australia, Japan and the United States.

EAM Jaishankar would also be on a bilateral visit to the Philippines from February 13-15.