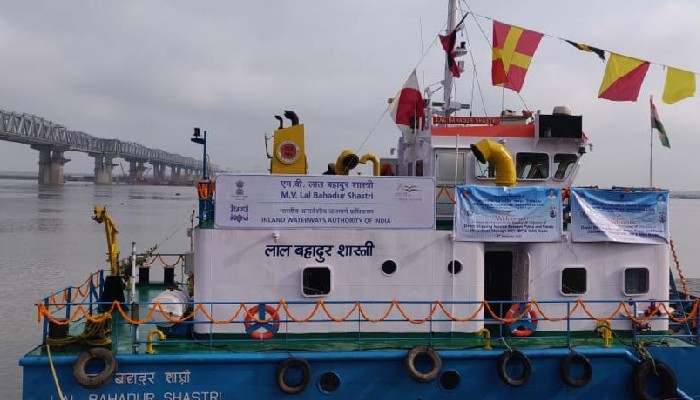 Minister of Ports, Shipping and Waterways Sarbananda Sonowal in a tweet said, “The development of national waterways as a powerful, well-organised network for cargo and people’s movement is intended to turn these into one of India’s strongest development anchors.”

Earlier, while addressing virtually on the occasion of ‘Flagging off of vessel’ MV Lal Bahadur Shastri, Commerce and Industry Minister, Piyush Goyal said that pilot movement of food grains on vessel from Patna (Bihar) to Pandu (Guwahati) will open a new gate to the ‘Gateway of North East’.

He stated that this 2,350 km voyage will open a new gate to the ‘Gateway of North East’ (Assam) and ensure seamless waterways connectivity to the North-Eastern region through Ganga and Brahmaputra rivers.

According to the Minister, the flagging of the vessel named MV Lal Bahadur Shastri reminded him of Shastriji’s slogan ‘Jai Jawan Jai Kisan’.

“This, will make our farmers Aatmanirbhar by expanding their reach and providing them better prices and better living. This event is a perfect demonstration of the PM's combined vision for ‘Act East’ policy and the inclusive development of Bihar and the North-East region,” he added.

The minister stated that the planned intermodal terminal at Kalughat, Bihar with Rs 78 Crore will provide a boost to the region's socio-economic development and create multiple job opportunities.

This will also help decongest the roads of North Bihar and provide an alternative route for transportation of cargo in this area, he further stated.

He further said that this route from Patna can prove to be a viable alternative to the conventional mode of movement of food grains and goods for the NE region.

The Minister informed that for seamless navigation to the North East region, two stretches of Indo-Bangladesh Protocol (IBP) route are being developed with Bangladesh having the budget of Rs. 305 Crore.

Enumerating the four major steps taken by the government for holistic development of waterways infrastructure and ecosystem, to increase share of inland water transport in overall cargo transport Goyal said that under PM GatiShakti, waterways is one of the 7 engines that is driving transformative approach for economic growth and sustainable development.

He informed that the government has undertaken the Jal Marg Vikas Project with Rs. 4,600 Crore for capacity augmentation of NW-1 (Ganga) for safe movement of vessels up to 2,000 tonnes.

The Minister also maintained that the project includes construction/setting up of multi-modal terminals at Varanasi, Sahibganj and Haldia, Ro-Ro terminals, jetties, vessel repair and maintenance facilities.

Eighty connectivity projects are in progress under Sagarmala to connect commercial hubs with ports, the Minister informed.

Goyal also stated that 106 new waterways in 24 States have been declared as National Waterways, taking the total number to 111.

The Minister said development of these rivers would include maintenance of infra for river shipping and navigation and warehouse facilities.

He said that our friendship has evolved into a strategic partnership with multifaceted and deep collaboration in trade, investment, food security and technology.