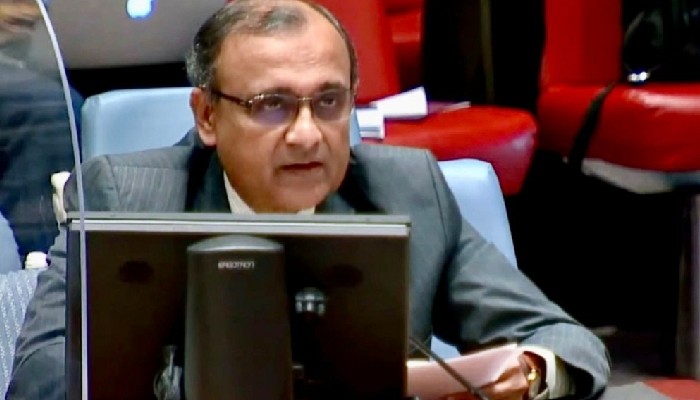 Noting that India’s interest is in finding a solution that can provide for immediate de-escalation of tensions on Ukraine, India at the UN Security Council on Monday said that quiet and constructive diplomacy is the need of the hour.

A statement by India’s Permanent Representative to the UN TS Tirumurti at the UNSC Meeting on threats to international peace and security (Ukraine) said that "it is our considered view that the issue can only be resolved through diplomatic dialogue".

India was one of three countries (Kenya and Gabon were the others) that abstained from a UNSC procedural vote on whether or not Ukraine would be discussed. China and Russia voted against the move. The US, which initiated the meeting and nine other countries, voted to hold the discussion.

“We have been closely following the evolving developments relating to Ukraine, including through ongoing high-level security talks between Russia and the United States, as well as under the Normandy format in Paris,” said Ambassador Tirumurti.

“India’s interest is in finding a solution that can provide for immediate de-escalation of tensions taking into account the legitimate security interests of all countries and aimed towards securing long term peace and stability in the region and beyond,” he told the Council.

“We have also been in touch with all concerned parties,” India’s UN envoy added.

Noting that it is India’s considered view that the issue can only be resolved through diplomatic dialogue, he said, the country welcomes the efforts underway including under the Minsk Agreement and the Normandy format.

“Flowing from the recently concluded meeting in Paris under the Normandy format, we also welcome the unconditional observance of the July 2020 ceasefire (in Donbass) and reaffirmation of Minsk Agreements as the basis of work under the ongoing Normandy format, in particular, commitment of all sides to reduce disagreements on the way forward,” Tirumurti stated.

“We also welcome their agreement to meet in Berlin in two weeks,” he said. “We urge all parties to continue to engage through all diplomatic channels and to keep working towards the full implementation of the ‘Minsk Package’,” the Indian Ambassador stated.

“Quiet and constructive diplomacy is the need of the hour. Any steps that increase tension may best be avoided by all sides in the larger interest of securing international peace and security,” he observed.

Alluding to the more than twenty thousand Indian students and nationals who live and study in different parts of Ukraine, including in its border areas, Tirumurti said that the well- being of Indian nationals is of priority to us.

He reiterated India’s call for the peaceful resolution of the situation by sincere and sustained diplomatic efforts to ensure that concerns of all sides are resolved through constructive dialogue.