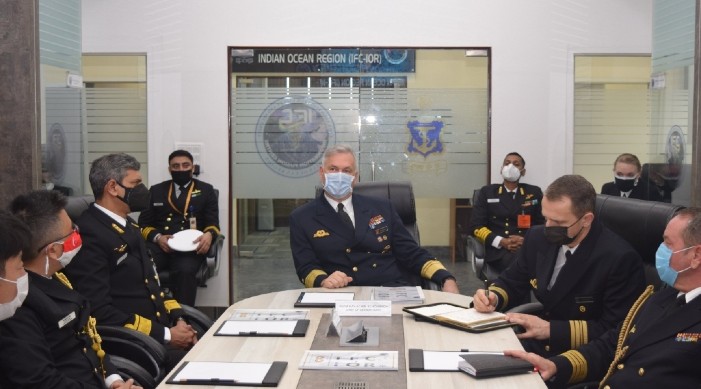 Describing India as an important strategic partner in the Indo Pacific region, German Naval Chief Vice Admiral Schönbach has said that both the nations should explore avenues to strengthen naval cooperation and enhance strategic engagement.

The Chief of the German Navy, who is on a visit to India, was delivering a talk on ‘Germany's Indo-Pacific Strategy’ at the Manohar Parrikar Institute for Defence Studies and Analyses (MP-IDSA) on Friday.

Vice Admiral Schönbach’s talk coincided with the docking of German Naval Frigate Bayern at the Mumbai port, MP-IDSA said in a press release.

Speaking on the occasion, Vice Admiral Schönbach, said that Bayern’s deployment in the region is in line with Germany’s Indo-Pacific policy guidelines that focus on maritime security and cooperation. Global stability is a pre-requisite for global stability, he observed.

Elaborating upon Germany’s commitment towards stepping up its security and defense engagements in the region, the Vice Admiral said that his country favours open shipping routes, open markets and free trade, but at the same time also supports digitalization, connectivity and human rights.

The deployment of Bayern is intended to reinforce the security aspect of Germany’s commitment in the Indo-Pacific, he added.

Reflecting upon China, he said that although Beijing is an important partner for both India and Germany, its assertive behaviour has put pressure upon the international order.

The deployment of the German frigate Bayern is largely seen as Germany’s renewed strategic interest in the region.

Vice Admiral Schönbach also visited the Information Fusion Centre - Indian Ocean Region (IFC-IOR). He was briefed on the "shared maritime domain awareness being developed at the Centre through collaboration with like-minded partners," IFC-IOR said on Twitter.

On Thursday, the German Chief of Naval Staff had called on Foreign Secretary Harsh Vardhan Shringla.

Their talks focused on maritime security cooperation in context of greater engagement by Germany in the #IndoPacific in line with its recent IndoPacific Guidelines, the Ministry of External (MEA) had said.