Common security of countries in Indo-Pacific require them to evolve rules-based order for region: FS Shringla 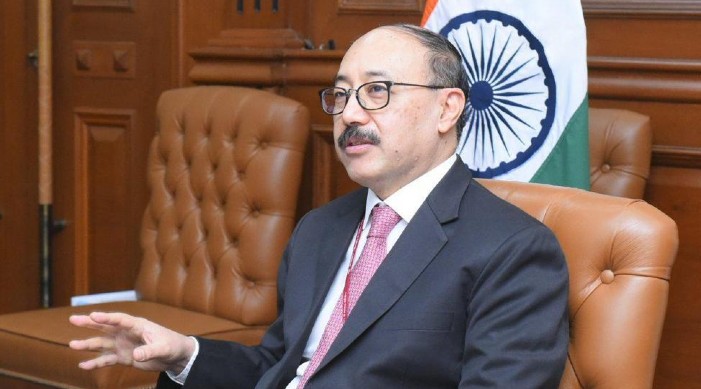 All countries with a clear stake in the security and stability of the Indo-Pacific have an important role to play in the region, said Shringla

Foreign Secretary Harsh Vardhan Shringla on Friday said “common prosperity and security” of all countries, including India in the Indo-Pacific requires them to evolve, through dialogue, a common rules-based order for the region.

“Such an order must respect the sovereignty and territorial integrity, as well as equality of all nations,” Foreign Secretary Shringla said in his remarks at the ORF-NMF-KAS Symposium on “Potential for Indo-European/German Cooperation in the Indo-Pacific.”

Talking about the International Tribunal for the Law of Sea’s verdict on the delimitation of maritime boundaries by India with Bangladesh and Myanmar, he said India’s record of respecting and accepting the ITLOS verdict speaks for itself.

Without naming China, he said the global challenges of sustainable development, environmental protection and climate change are more acute in the region. “They can only be addressed through collaborative effort that promotes linkages rather than economic dependencies and debt traps,” the Foreign Secretary said.

Maintaining that Europe and the Indo-Pacific regions are closely interlinked through strong trade and investment linkages, he said, “All countries, including those outside the region with a clear stake in the security and stability of the region, have an important role to play.”

Focusing on counter-terrorism, he said failure to cooperate can only embolden terrorists towards more audacity. “You would recall the horrific 26/11 Mumbai terrorist attack in which Indian, German and other nationals had lost their lives. The recent incident in Texas, United States once again demonstrates that the international network of terror, with its epicenter in India’s neighbourhood, is very much active and has long lasting implications,” he added.

Describing terrorism as a global threat, the Foreign Secretary said it requires an unambiguous, undivided, effective and collective response.

Calling for the removal of ambiguity on dealing with terrorism, he quoted External Affairs Minister, S. Jaishankar’s speech at the UN Security Council wherein he had said, “There cannot be any exception or any justification for any act of terrorism, regardless of motivations behind such acts.”

“Just two days ago, India reiterated its position when it conveyed that any attack on innocent civilians and civilian infrastructure was completely unacceptable; would be in blatant violation of international law; and against all civilized norms,” he added.

Inviting Germany to participate in the would-be conference on “No Money for Terror” to be hosted by India this year, he said, “We look forward to participation from Germany in this important initiative.”