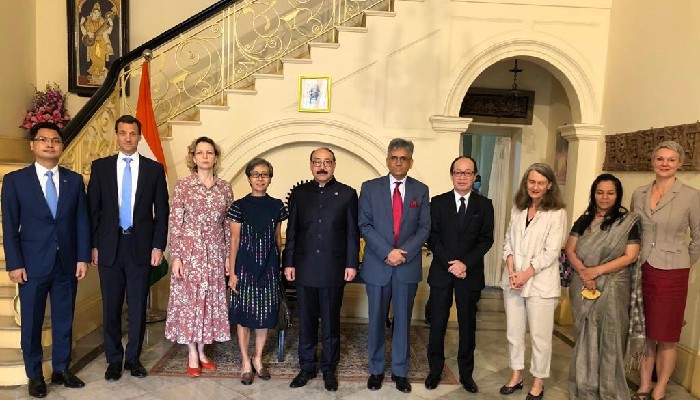 The two-day visit of the Indian Foreign Secretary Harsh Vardhan Shringla to Myanmar on December 22-23, 2021 is not only the first visible outreach by New Delhi after the military take-over on February 1 but was also a reflection on the contradictions and complexities governing the affairs of the world.

While reiterating the importance of Myanmar returning to the democratic-fold and addressing domestic challenges through democratic means, this visit symbolises India’s pragmatic approach to this eastern neighbour by not allowing bilateral realties to be blind-sided by altruistic principles. This compartmentalisation is a reflection of New Delhi recognising the ground situation, like Myanmar’s ASEAN neighbours, and is a tacit acknowledgement of the nature and character of that nation.

While the coup de d'etat of February might have come as a surprise to many, counter-intuitively, it was in the making all along. Alleged electoral malpractice by the civilian government was only an official excuse for the Tatmadaw (army) and especially for Sr. Gen. Min Aung Hlaing. Given the continual political and ethnic unrest and violence, the military led State Administrative Council’s (SAC) heavy-handed handling was on expected lines. It holds good for the return of hostilities and consequent military operations, which did not really end when democracy, ‘guided and controlled’ as it was, got restored.

Even when Myanmar was flirting with an illusory democracy, the Tatmadaw continued to hold sway over political administration. The primary motivation for the Tatmadaw to introduce what could at best be described as a semblance of guided-democracy was necessitated by pragmatic convenience. The civilian government carried the burden of administration and governance while the army retained the writ over the state and its people. This alone had been incorporated into the 2008 Constitution, written by the Tatmadaw, for the Tatmadaw and to serve the unsaid interests of the Tatmadaw. With the result, the military chief as an institution not only held the reins of the sensitive branches of the executive but also had the power to veto the nation’s legislature. Therefore, the notional withdrawal of the armed forces from the affairs of the state was not meant for the military to return to the barracks. Instead, it made the so-called civilian government first as a scapegoat and eventually the proverbial sacrificial lamb.

Needless to say, the provocation for the coup lay in the overwhelming success of the 2008 constitutional system and the Tatmadaw’s absence of prudence in appreciating the nuances of electoral politics. Democracy icon Aung San Suu Kyi’s National League for Democracy’s (NLD) recording a bigger electoral win in 2020 than in the outing five years earlier was a reflection of public sentiments, and held out a stronger challenge to the generals than in the past. The coup was thus principally aimed at the Tatmadaw redeeming the lost political ground, cutting the civilian establishment to size and addressing the newly-identified lacuna in the guided democratic system by uprooting it. The accompanying suppression of democratic rights and the escalation of ethnic strife are inevitable fallout of military intervention.

India and the Junta

A cold assessment of the Indian perspective on Myanmar at present can be singularly summarised as the return of the 1990’s but hopefully without the faux pas of the past. In the nineties, New Delhi placed a premium on principles and not prudence. Rapprochement was achieved only after New Delhi reversed the approach towards the reclusive nation by not referring to the idea of democracy and the elections of the 90’s. The current Indian approach is not dissimilar to the corrected position of the past. It also gels with the current attitude of Asian compatriots, who are engaging the SAC even while calling upon the junta to withdraw to restore the duly elected government.

Collectively, these nations realise that the Tatmadaw is not yet another institution or a political player but is the heart and soul of Myanmar. This is because the military has been at the core of the nation’s politics and whatever little nation-building process was possible even before gaining independence from the UK. Since then, the military, which vehemently disregards all notions of human rights and inclusive politics, has come to see itself as the sole custodian of Myanmar. Worse still, the institution has remained the personal fiefdom of the armed chief as it lacks internal processes as the boss is always right and stays at the top for years, if not decades.

Reopening the official line of communication in this background, through Secretary Shringla’s visit, India has extended its neighbourhood vaccine diplomacy, with a million doses for Myanmar along with a grant of much-needed shipment of 10,000 tonnes of food grains. New Delhi has also reviewed and renewed its commitments on ongoing projects like the Kaladan transport corridor, Trilateral Highway, Rakhine State Development Programme and Border Area Development Programme. Secretary Shringla also discussed with the junta government, issues of immediate concern for India, like security, stability and peace along the 1700- km long porous border, especially in the light of the recent acts of violence in Manipur. .

On political issues, the Foreign Secretary called on Prime Minister and SAC Chairman, Gen. Min Aung Hlaing, and other senior government leaders. Though the junta leaders disregarded India’s intention for Shringla to meet Aung San Suu Kyi, now on four-year jail-term, he did have constructive engagement with representatives of the civil society and political parties, including the NLD, apart from UN officials and diplomats from other nations, on the ground situation. In all this, Secretary Shringla’s well thought-out poll-eve visit of 2020 polls, that too in the unusual company of Army chief, Gen M M Naravane, should have helped.

In the weeks immediately after the Myanmar coup, by stamping its mark of approval on the ASEAN’s Five-Point Consensus, India had quietly outsourced the responsibility of constructive political engagement to this regional collective. Still, answer to the question when would the tide in Myanmar turn in favour of democracy, depends on two individuals who remain drastically poles apart –namely, Aung San Suu Kyi and Gen Min Aung Hlaing.

Notwithstanding the general’s personal position in the matter, if any, the military as an institution could be expected to consider disengaging from direct administration only after it is reassured that the 76-year-old frail lady that Suu Kyi, would not be able to meddle in domestic affairs as in the past decades, and another cult figure does not emerge to challenge the Tatmadaw. Only in such a scenario could the Tatmadaw be expected to entertain the idea of a palatable non-military dispensation as its stooge. Under such conditions, the military may consider redrafting the Constitution to hoodwink the outside world but at the same time put in place a far more subservient elected civilian administration than in the immediate past – ensuring that no democratic icon could upset the apple-cart in the foreseeable future.

The author is a security and foreign policy analyst; views expressed are his personal