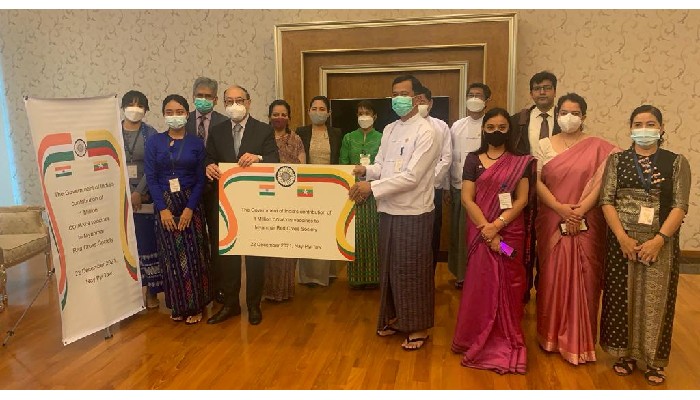 Foreign Secretary Harsh Vardhan Shringla on Wednesday handed over 1 million doses of ‘Made in India’ vaccines to the representatives of the Myanmar Red Cross Society.

“Foreign Secretary @harshvshringla handed over 1 million doses of 'Made in India' vaccines to the representatives of the Myanmar Red Cross Society to support the people of Myanmar, including those along the India-Myanmar border, in their fight against COVID-19,” Indian embassy in Yangon tweeted.

This is the first high level diplomatic visit from India to Myanmar since the February 1 military coup in the country.

According to the Ministry of External Affairs, during the visit, Foreign Secretary will hold discussions with the State Administration Council, political parties and members of civil society.

Issues relating to humanitarian support to Myanmar, security and India-Myanmar border concerns, and the political situation in Myanmar will be discussed, the MEA said.

Myanmar is reeling under the impact of the COVID-19 pandemic and is increasingly finding it difficult to reach medicines to far-flung areas in the country.

During his visit, the Foreign Secretary is likely to review the status of projects such as the Kaladan Multi-modal transit transport project that is being implemented with an Indian grant of $484 million.

Myanmar is one of India's strategic neighbors and it shares a 1,640 km-long border with the country’s northeastern states.