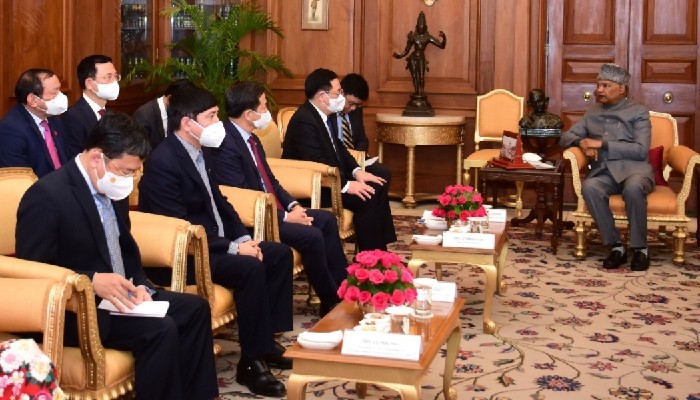 A parliamentary delegation from Vietnam called on President Ram Nath Kovind on Sunday.

India and Vietnam enjoy excellent relations at the leadership level and their defence partnership between has been growing steadily, President Ram Nath Kovind said on Sunday.

He was interacting with a Parliamentary Delegation from Vietnam led by Vuong Dinh Hue, the Chairman of the National Assembly of the Socialist Republic of Vietnam, which called on him at Rashtrapati Bhavan.

"Today, our bilateral Comprehensive Strategic Partnership covers wide range of areas – from political engagement to trade and investment ties, energy cooperation, development partnership, defence and security cooperation and people-to-people relations,' the President said, according to a press release issued by the Ministry of External Affairs (MEA).

The President noted that economic engagement between India and Vietnam had maintained a positive direction, despite the disruptions due tothe COVID-19 pandemic.

He was also happy to note that defence partnership between India and Vietnam has been growing steadily. He said that strong defence cooperation between the two countries would contribute to peace, security and prosperity in the region, the MEA release added.

Recalling his visit to Vietnam in 2018, the President said that he himself witnessed the rich cultural heritage of Vietnam and ancient civilizational exchanges between two countries, including our strong Buddhist connections.

Speaking about the cooperation between India and Vietnam at multilateral fora, President Kovind said that coordinated efforts at the UN and other fora have given voice to the majority of developing countries.

According to the MEA, he noted that India and Vietnam have been working with ASEAN to contribute to free, open, peaceful, prosperous, inclusive and rules-based Indo-Pacific region governed by international law.