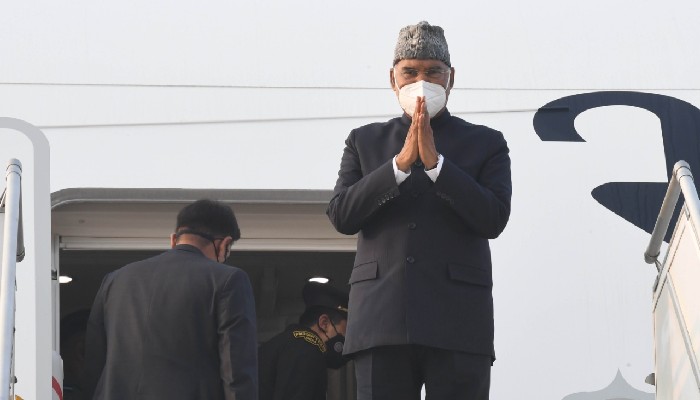 President Ram Nath Kovind on Wednesday embarked on a state visit to Bangladesh to attend the 50th Victory Day celebrations of the 1971 Liberation War. This is the President’s first visit abroad since the COVID-19 pandemic.

A twitter post by Rashtrapati Bhawan said, “President Ram Nath Kovind emplanes for Dhaka to participate in the special celebrations of Mujib Shato Borsho and the 50th anniversary of Bangladesh’s Liberation. This is the first state visit of the President since the outbreak of COVID-19 pandemic.”

In a special media briefing, Foreign Secretary Harsh Vardhan Shringla on Tuesday informed that this visit will be form December 15-17 in the context of the 50th Victory Day celebrations in Dhaka, at which the President of Bangladesh has invited the Indian President to represent India as a guest of honour in this historically significant event.

President Kovind will be accompanied by Union Minister of State for Education, Dr. Subhas Sarkar and Member of Parliament, Rajdeep Roy, Shringla informed.

Noting that this year is of great historical significance, the Foreign Secretary said besides commemorating the Golden Jubilee of Bangladesh's independence, it also commemorates 50 years of establishment of diplomatic relations between India and Bangladesh.

“It commemorates 50 years of the establishment of diplomatic relations between our two countries. It also commemorates the great victory over the Pakistani army and their unconditional surrender to our joint forces, the forces of Indian armed forces and Bangladesh's forces on the 16th of December, 1971,” he stated.

This will be President of India’s first foreign visit since the outbreak of the COVID pandemic, Shringla said.

“It also signifies the importance both countries attach to this visit, Bangladesh inviting an Indian President to be the guest of honour on this occasion to jointly commemorate this event at which he is the only foreign dignitary who would be represented,” the Foreign Secretary said.

“At the same time our President going out for the first time since the COVID pandemic is also very significant,” the Foreign Secretary added.

“The last Presidential visit from India to Bangladesh was undertaken by Pranab Mukherjee in 2013. Rashtrapati ji’s visit to Bangladesh has several significant elements, which reflects the strength of the India-Bangladesh partnership,” he said.

According to Shringla, the President will begin his visit to Bangladesh by paying tributes to martyrs at the National Martyr’s Memorial at Savar.

“The President will thereafter visit the Bangabandhu Memorial Museum to pay respect to the memory of Bangabandhu Sheikh Mujibur Rahman, the father of the nation of Bangladesh,” the Foreign Secretary said

On the forenoon of December 16, President Kovind will attend the Victory Day parade at the National Parade ground as guest of honour, Shringla adding that the parade includes a 122 member tri service contingent from the Indian armed forces which is very unique and very special.

Later in the evening, he will attend as the guest of honour at the Victory Day reception hosted by the President of Bangladesh in their parliament premises to mark the conclusion of "Mujib Borsho” celebrations, the Foreign Secretary noted.

President of India’s programme also includes interaction with the cross section of Bangladeshi society, the Indian community and places of cultural and historical importance in Bangladesh. He will depart for India on December 17, 2021, he said.

“Bangladesh is a central pillar of our 'Neighbourhood First Policy'. It is also a relationship where this policy intersects with elements of our Act East Policy,” Shringla stated.

He recalled that in March, Prime Minister Narendra Modi paid a state visit to Bangladesh to join the ‘Triveni’ of celebrations of the golden jubilee of the independence of Bangladesh, the birth Centenary of Bangabandhu Sheikh Mujibur Rahman; and 50 years of the establishment of diplomatic relations between India and Bangladesh.

“It is a measure of the importance that we accord to our relations with Bangladesh that it is the destination of the first post pandemic visits by both the President and the Prime Minister of India,” he mentioned.

“Bangladesh is also one of our most important development partners both in terms of value and range of cooperation. We extend about a third of our total global development assistance under the lines of credit to Bangladesh,” Shringla said.

“The visit of Rashtrapati ji is an occasion not just to take note of these encouraging trends and developments. It's also an occasion to seek newer areas of cooperation such as renewable energy, working together in the digital space, creating 21st Century education and health care links,” he reckoned.

“ Rashtrapati ji is looking forward to being amongst the people of Bangladesh during these historic celebrations, he will carry with him the continuing good wishes of the people of India. And the message is that we will continue to stand behind Bangladesh in its developmental journey,” Foreign Secretary Shringla said.