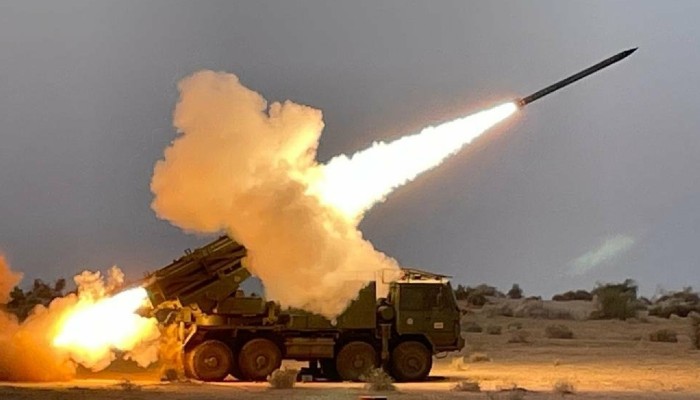 The Pinaka-ER Multi Barrel Rocket Launcher System was tested at the Pokharan range.

Successful tests of the Pinaka Extended Range (Pinaka-ER), Area Denial Munitions (ADM) and indigenously developed fuzes have been carried out at various test ranges, the Ministry of Defence announced on Saturday.

The Pinaka-ER Multi Barrel Rocket Launcher System was successfully tested at the Pokharan range in Rajasthan over the last three days.

The Pinaka-ER is the upgraded version of the earlier Pinaka version which has been in service with the Indian Army for the last decade. The system has been designed in the light of emerging requirements with advanced technologies enhancing the range.

The DRDO, along with the Army, conducted a series of performance evaluation trials of these industry produced rockets at Field Firing Ranges, said the defence ministry.

The DRDO, after establishing the performance efficacy of the enhanced range Pinaka, transferred the technology of the system to the industry.

The Industry Partner has manufactured enhanced Pinaka Mk-1 rockets with DRDO’s handholding during the production and Quality Assurance.

In continuation of the Transfer of Technology absorption, rockets developed by the industry have undergone the performance evaluation and quality certification process.

The hand holding during the production, quality assurance and launch coordination for bulk production is being provided by the DRDO design team and QA agencies nominated for the system, said the defence ministry.

The Area Denial Munition (ADM) variants of munition designed by the ARDE, Pune for Pinaka and manufactured by the industry partners under technology transfer were also successfully carried out at the Pokhran Field Firing Ranges.

These trials are part of performance evaluation under technology absorption, the defence ministry said.

The indigenously-developed proximity fuzes for Pinaka rockets have also been tested.

The ARDE, Pune has developed different fuzes for Pinaka rocket for different types of applications.

After design validation trials, dynamic performance evaluation of these fuzes have been evaluated with flight testing. "Consistency in performance of fuzes has been established in consecutive flight trials," the defence ministry said.

These have been developed through dedicated indigenous R&D efforts for the first time in the country. These indigenously developed fuzes will replace the imported fuzes and save foreign exchange. The ARDE has also designed miniaturised fuzes for ADMs.

Performance of dual-purpose Direct-Action Self Destruction (DASD) & Anti-Tank Munition (ATM) fuzes were evaluated during the current flight trials and the results were satisfactory.

"All the mission objectives were successfully in all the above trials," said the defence ministry.
Attachments area