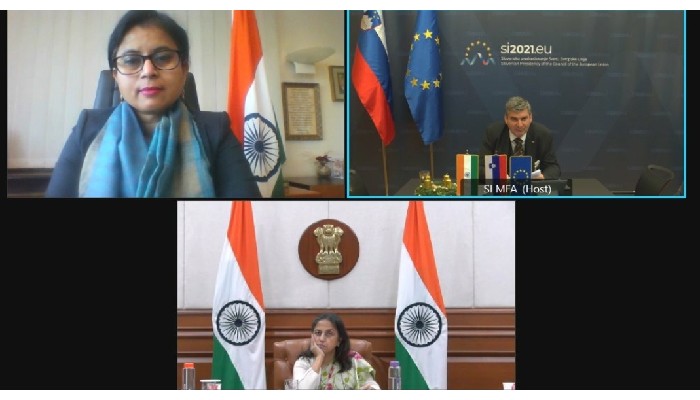 The 8th Foreign Office Consultations between India and Slovenia took place in a virtual format.

This was part of the discussions at the 8th Foreign Office Consultations between India and Slovenia that took place in a virtual format.

They also discussed ways to enhance tourism and agreed that direct air connectivity would lead to increased people-to-people ties, said a press release issued by the Ministry of External Affairs (MEA).

The talks covered the entire gamut of bilateral relations, including political, economic, cultural and academic ties.

According to the MEA, regional and global issues including developments in the Indo-Pacific, India-EU relations, developments in each others’ neighborhood and Climate Change were discussed. The two sides welcomed the convergence in our approach to the Indo-Pacific and looked forward to working together in areas of connectivity and digitization.

The consultations were led on the Indian side by Secretary (West) Reenat Sandhu and on the Slovenian side by State Secretary (Deputy Minister), Ministry of Foreign Affairs Stanislav Raščan.

India and Slovenia share warm and cordial relations which are based on shared values of democracy, freedom, rule of law and respect for human rights.

Next year, India and Slovenia will be commemorating 30 years of the establishment of diplomatic relations.

The Foreign Office Consultations were held in the back drop of Slovenia celebrating 30 years of independence this year and Slovenia’s Presidency of the Council of the European Union for the period July-December 2021, the MEA pointed out.

Both sides welcomed the recent high level interactions despite Covid-19 pandemic and agreed to continue such exchanges both bilaterally and at various multilateral fora. The two sides also exchanged views on the Covid-19 pandemic including mutual recognition of vaccines.

The two sides welcomed the discussions at the 9th Joint Economic Committee.

Both sides also welcomed the establishment of India Study Centre at Nova University at Ljubljana.

The Slovenian side briefed on their priorities during their Presidency of the Council of European Union including the EU enlargement process.

Deliberations also covered cooperation in multilateral fora in areas such as United Nations reforms, and India’s priorities during its term in the United Nations Security Council.
Attachments area