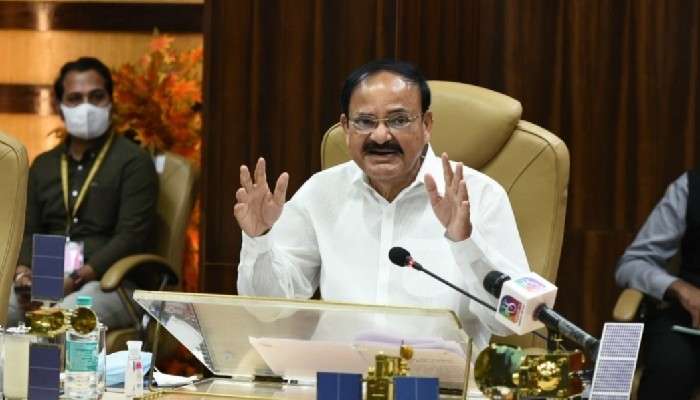 Vice President M Venkaiah Naidu will participate in the First Plenary Session as well as the Retreat Session of the Summit.

The 13th ASEM Summit, which will also mark the 25th anniversary of the ASEM process, will be held on Thursday and Friday.

The ASEM Agenda for 2021 will prioritize on issues related to strengthening multilateralism, post-Pandemic Socio-Economic Recovery and Development as well as other regional and global issues of common interest and concern, the Ministry of External Affairs (MEA) said in a Press release issued on Wednesday.

Along with the Opening Ceremony, Vice President Naidu will also participate in the First Plenary Session as well as the Retreat Session of the Summit.

According to the MEA press release, he will exchange views on areas like reformed multilateralism, fight against pandemic and post-pandemic recovery, mitigating global climate change, Sustainable Development Goals (SDG), and maritime safety and security.

ASEM is a platform for the countries in Asia and Europe to exchange views on regional and global issues and strengthen cooperation on a wide range of areas emanating from its three pillars – political and security, economic and financial and socio-cultural.

The ASEM grouping comprises 51 member countries and 2 regional organizations – European Union and ASEAN. Countries in the grouping represent 65% of global GDP, 60% of the global population, 75% of global tourism and 55% of global trade.

The ASEM Summit is a biennial event alternating between a country in Asia and Europe. It is the foremost event of ASEM process to set its priorities for dialogue and cooperation between Asia and Europe in the areas of political, economic, financial, social, cultural, and educational issues of common interest in a spirit of mutual respect and equal partnership.

India joined the ASEM process in 2006. The 7th ASEM Summit held in 2008 saw the first Summit level participation from India.