‘India takes its commitments to be a responsible international player with utmost seriousness’: FS Shringla 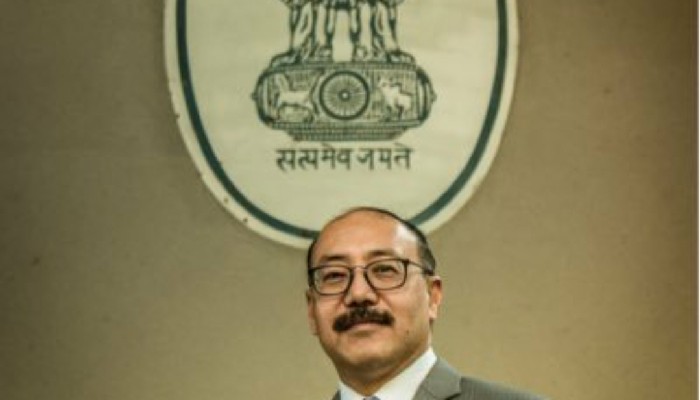 Foreign Secretary Harsh Vardhan Shringla on Wednesday said that India takes its commitments to be a responsible international player with utmost seriousness, arguing that New Delhi’s approach to improving public good is evident in India’s approach to its neighbourhood.

“India is a country with global interests and takes its commitments to be a responsible international player with the utmost seriousness,” said Foreign Secretary Shringla in his remarks on ‘Bharat@75: Empowering India: Today for Tomorrow’ at the Annual General Meeting and Annual Session of The Indian Chamber of Commerce.

“Our approach to improving global public good is evident in our approach to our neighborhood. We have made an enormous effort to improve connectivity in this region,” he noted.

Calling Kolkata a great center of trade and industry, Shringla said the city’s location, its port and its hinterland have made it a global city.

“Today, these very characteristics place it on newer cross roads,” he reckoned.

Referring to the central position of the Indo-Pacific Region, the Indian Foreign Secretary said ASEAN countries were central to our Indo-Pacific strategy.

“Neighbourhood First and Act East are two fundamental pillars of our foreign policy. These two pillars literally intersect in this part of our country,” he stated.

Mentioning that India was linked to South East Asia by land through the North Eastern region, Shringla said this region was linked by the Bay of Bengal to the Indian Ocean and the Indo-Pacific.

Informing that the lines of communication were being created through North East India to South and South East Asia, he gave examples of the Kaladan multi-modal transport project, which pivots on Sittwe port in Myanmar, and the Trilateral Highway project.

“Five of the six rail links that connected Bangladesh and India before 1965 and were interrupted by the vagaries of history have been reactivated. More are being built,” Foreign Secretary Shringla said.

He informed that Indian was now connected to Nepal through the Jayanagar- Kurtha railway line and a Raxaul Kathmandu railway was on the anvil.

“Today, people travel to Dhaka directly by bus, train and air. They can travel to Agartala via Bangladesh by bus. They can ship goods to Agartala multi-modally through Ashuganj and Chittagong,” Shringla said.

“Future plans to enhance connectivity include extending the Trilateral Highway to Laos, Cambodia and Vietnam. Railways that link India and Myanmar and further to Thailand, Laos, Singapore, Cambodia, Vietnam and Bangladesh are all in the realm of possibility,” he further stated.

“A network of land ports and integrated check posts are being built along our land borders to upgrade the cargo transshipment and passenger transit experience,” the Indian Foreign Secretary said.

He added that these will create new transport corridors that will facilitate rapid transport of goods and people between different nations in the region and different parts of India.

“A common energy market is slowly and surely being created. The Indian grid is connected to Nepal, Bhutan and Bangladesh. These allow India to supply 1160 MW of power to Bangladesh, about 700 MW to Nepal, and import 1.8 GW from Bhutan. Trans-national movement of electricity in the neighborhood is thus a reality,” Shringla said.

“Procedures for export and import of electricity with our neighbouring countries have also been notified,” he informed.

According to India’s top diplomat, hydrocarbon pipelines are being created to link India with Nepal and Bangladesh.

“We have tried to increase our engagement with such stakeholders and partners through a number of public diplomacy initiatives,” he stated.