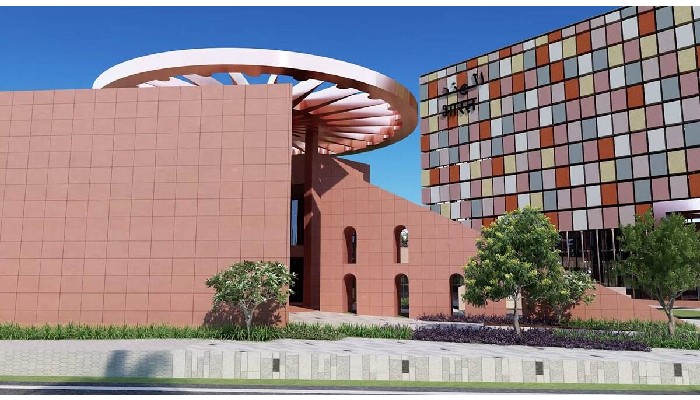 The pavilion was inaugurated by Minister of Commerce and Industry, Piyush Goyal on October 1

While attaining the distinction of being one of the most-visited pavilions at EXPO2020 Dubai, recording 3.5 lakh visitors in less than 50 days, India Pavilion has now been recognized as 'One of the Most Iconic' pavilion by the American Institute of Architects (AIA).

"We are pleased to be a part of India's journey and success at the EXPO2020 and are happy to celebrate the achievement. At AIA, our primary goal is to ensure the safety of the planet with a focus on sustainable practices,” AIA President Daniel S Hart said on India’s remarkable achievement at EXPO2020.

He also added, “The India pavilion has achieved the same while representing the diverse cultural background of the country. The Pavilion not only showcases the rich history of the country, but also represents the numerous opportunities, possibilities and offers a window into the future.”

Talking about the uniqueness of the India pavilion, Aman Puri, Consulate General of India in Dubai said, "We are delighted to see the response towards the India Pavilion and the work done by CP Kukreja Architects led by Dikshu Kukreja.

“We would like to thank AIA for choosing the India Pavilion as one of the most iconic pavilions at EXPO2020 Dubai. We believe the theme of 'Connecting minds, creating a future' has been translated through the pavilion structure," he added.

"As India represents a rich blend of cultures and influences, the same is also represented in our architectural heritage. India is home to 1/6th of humanity and is an enormously diverse nation, the India Pavilion beautifully captures this diversity and tells the story of India,” Puri informed.

“Every day, we see thousands of excited visitors who are mesmerized by the interactive nature of the Pavilion. We are looking forward to hosting many such visitors and sustaining the momentum," Indian Consul General in Dubai added.

"It is a great honour to be recognised by AIA, and we are delighted to showcase our country at the Expo," said Dikshu C Kukreja, Principal Architect of the India pavilion.

“We recognise the significance of EXPO2020 Dubai, and the pavilion has been designed to highlight India's diversity, heritage, and numerous opportunities on a global stage," he said.

"It has been a pleasure to show the world that India's architecture has evolved greatly from the ancient monuments and is now at par with the global contemporary architecture,” Kukreja said.

“Our primary goal was to show the transformation our country has gone through since independence while keeping in mind the expo themes of sustainability, mobility and connectivity. The kinetic facade, which changes with the Expo themes, has been crucial in showcasing the diversity of our country and interacting with the visitors," he added.

Thanking AIA for acknowledging India Pavilion as one of the most iconic structures among participating countries, Kukreja said, "Our goal of representing India's cultural and economic growth has been translated into a tangible achievement."

Since its inauguration on October 1 by Indian Minister of Commerce and Industry, Consumer Affairs, Food and Public Distribution, and Textiles, Piyush Goyal, the India Pavilion has hosted a number of industry and state-specific events to promote India's achievements and future plans.

In addition, the Pavilion has showcased India's rich cultural legacy and has hosted numerous cultural events that feature a unique blend of India's culture, technology, and business potential.

The India Pavilion's external facade is made up of 600 separate colourful bricks that can move, signifying the theme ‘India on the Move.’

Visitors may also try out the pavilion's immersive AI and VR technologies, which transports them to a virtual India.