‘Some irresponsible nations come up with inappropriate interpretations to international laws’: Rajnath Singh 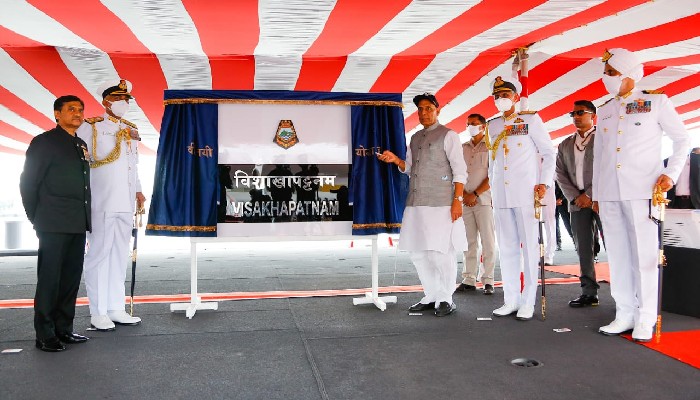 India, as a responsible maritime stakeholder, is a supporter of a peaceful, open, rule-based maritime order

In a veiled attack on China, Defence Minister Rajnath Singh on Sunday said some irresponsible nations with narrow partisan interests and hegemonic tendencies are coming up with inappropriate interpretations to international laws.

It is a matter of concern that UNCLOS is being repeatedly weakened by arbitrary interpretation of its definition by some nations, Singh stated after commissioning of Indian Navy's destroyer Visakhapatnam at the Naval Dockyard in Mumbai on Sunday.

“In the 'United Nations Convention on the Law of the Sea' (UNCLOS) of 1982, territorial waters of nations, exclusive economic zones and the principle of 'Good order at sea' have been propounded. Some irresponsible nations, for the sake of their narrow partisan interests, keep on giving new and inappropriate interpretations to these international laws from hegemonic tendencies,” Singh said.

“The arbitrary interpretations create obstacles in the path of a rule-based maritime order. We envision a rule-based Indo-Pacific, with freedom of navigation, free trade and universal values, in which the interests of all the participating countries are protected,” he argued.

Singh emphasised on the need to keep the Indo-Pacific region open, safe and secure, terming it as the primary objective of the Indian Navy.

He asserted that India’s interests are directly linked with the Indian Ocean and the region is crucial for the world economy.

“Challenges such as piracy, terrorism, illegal smuggling of arms and narcotics, human trafficking, illegal fishing and damage to the environment are equally responsible for affecting the maritime domain. Therefore, the role of the Indian Navy becomes very important in the entire Indo-Pacific region,” the Defence Minister added.

He underscored the importance of a rule-based freedom of navigation and security of sea lanes in the present era of globalisation to ensure stability, economic progress and development of the world.

Singh reiterated that India, as a responsible maritime stakeholder, is a supporter of consensus-based principles and a peaceful, open, rule-based and stable maritime order.

The Minister lauded the Indian Navy for taking forward the Prime Minister’s vision of SAGAR (Security and Growth for All in the Region) with the spirit of friendship, openness, dialogue and co-existence with the neighbours.

He termed INS Visakhapatnam as a symbol of the growing maritime prowess of the country and a major milestone in achieving Prime Minister Narendra Modi’s vision of ‘Make in India, Make for the World’.

According to the Minister, the ship is a reminder of ancient and medieval India's maritime power, shipbuilding skills and glorious history.

He exuded confidence that the state-of-the-art ship, equipped with the latest systems and weapons, will strengthen maritime security and protect the interests of the nation.

Singh defined the ship as one of the most technologically advanced guided missile destroyers in the world which will cater to the present & future requirements of the Armed Forces and the Nation as a whole.

The Defence Minister appreciated the self-reliance efforts of the Indian Navy, terming the Indian Navy's order of 39 of the 41 ships and submarines from Indian shipyards as a testament to their commitment towards achieving ‘Aatmanirbhar Bharat’.

He described the development of Indigenous Aircraft Carrier 'INS Vikrant' as an important milestone in their path to achieve ‘Aatmanirbharta’.

He praised the Indian Navy's consistent efforts to participate in various outreach programmes of the industries and increase indigenised items under 'Float', 'Move' and 'Fight' categories.

Stressing on the need to maintain the momentum, Singh expressed confidence that “the steps taken by the government will continue to provide a boost to the self-reliance efforts and we will soon build ships not just for India, but for the entire world”.

He assured of the government’s continuous support to achieve this vision.