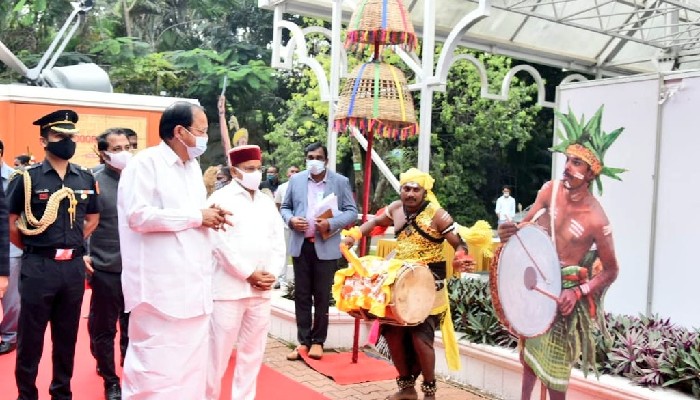 There is a need to channelize natural skills of tribal people to promote and popularize their products and improve their sources of income, said Naidu

Vice President M. Venkaiah Naidu on Monday called upon people to come forward and support the tribal crafts persons and artisans by buying products made by them.

He said that the tribal communities are coming up with innovative handicraft products which are eco-friendly and sustainable.

Vice President Naidu emphasized the need to channelize the natural skills of tribal people to promote and popularize their products and improve their sources of income. "There is also a need to create adequate marketing avenues for the products of tribal craftsmen and women," he added.

"These tribal movements that sprung up in different corners of the country inspired many to rise against the unfair British rule," he added.

Complimenting the government for declaring the birth anniversary of legendary tribal freedom fighter Birsa Munda as Janjatiya Gaurav Divas, the Vice President said that it was important to highlight the valiant stories of tribal freedom fighters like Rani Durgavati, Rani Gaidinliu and Baba Tilka Majhi, Komaram Bheem, Alluri Sitaramaraju and others.

He said that celebrating Janjatiya Gaurav Divas every year will make the coming generation aware of the courage, fearlessness and sacrifices of the tribal freedom fighters.

The Vice President expressed his happiness over the week-long celebrations that commenced from November 15, 2021 to commemorate 75 years of glorious history of tribal people, culture and achievements.

Pointing out the uniqueness of the tribal communities, the Vice President said, "What makes our tribal communities special is the fact that they are deeply connected to nature and have managed to retain their culture, languages, customs and traditions."

He said that the Janjatiya Gaurav Divas will also help recognize the efforts of the tribals in the preservation of their cultural heritage and promotion of Indian values.

Felicitating tribal student achievers from the region, Naidu remarked that their success proves that given opportunities, tribal children can excel in any field.

The Vice President visited the walk through exhibition organised by the Tribal Welfare Department, Government of Karnataka at the Raj Bhawan.

Naidu also witnessed cultural performances such as Dollu Kunitha by tribal communities of Valmiki, Siddi, Soliga, Kudiya among others, during the occasion