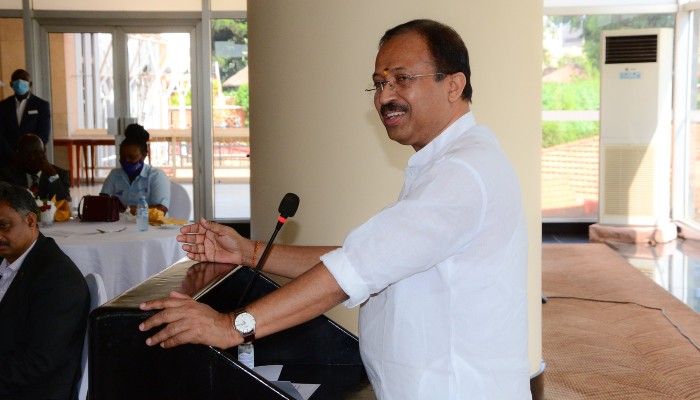 Minister of State for External Affairs V Muraleedharan on Saturday addressed Ugandan business at an event organized by Uganda Investment Authority in Kampala and highlighted the improved business climate in India and how both countries could benefit out of it.

Minister of State, V Muraleedharan is a five-day ( November 11 to 15) official visit to Uganda and Rwanda. This is his first visit to both the countries.

Taking to twitter on Saturday, Muraleedharan said, “Addressed Ugandan businesses at an event organised by Uganda Investment Authority in Kampala. Appreciate their ideas to further increase the bilateral trade & investment. Highlighted the improved business climate in India and how both countries could benefit out of it.”

Muraleedharan in his tweet added that the newly inaugurated centre is a part of India’s commitment to capacity building of students in Uganda.

Earlier on Thursday, the MoS for External Affairs met President of Uganda, Yoweri K Museveni and interacted with Ugandan Business Community and the Indian community in Uganda.

Muraleedharan informed that the Ugandan President praised the Indian community in the country for their significant contributions.

Taking to twitter, the Minister wrote on Thursday, “Delighted to have called-on President of Uganda Kaguta Museveni. Conveyed greetings of PM Narendra Modi Ji. The President praised the Indian community in Uganda for their significant contributions.”

Again on Thursday, Muraleedharan had informed that he had a fruitful and engaging discussion with his Ugandan counterpart Okello Oryem.

On the same day, he also met Minister of States Finance Henry Musaafi and agreed to work together in diversified areas and take the relationship further ahead between the two nations.

After completing his visit to Uganda on Saturday, Muraleedharan will proceed to visit Rwanda on November 14-15 and Co-Chair the first Joint Commission Meeting with Minister of Foreign Affairs and International Cooperation Dr. Vincent Biruta.

He will also call on President of Rwanda Paul Kagame.

During the visit, the Minister will inaugurate the India-Rwanda Entrepreneurship Development Centre, set up under the Government of India’s grant assistance, and will pay a courtesy visit to Kigali Genocide Memorial. He will also interact with the Indian Community in Rwanda.