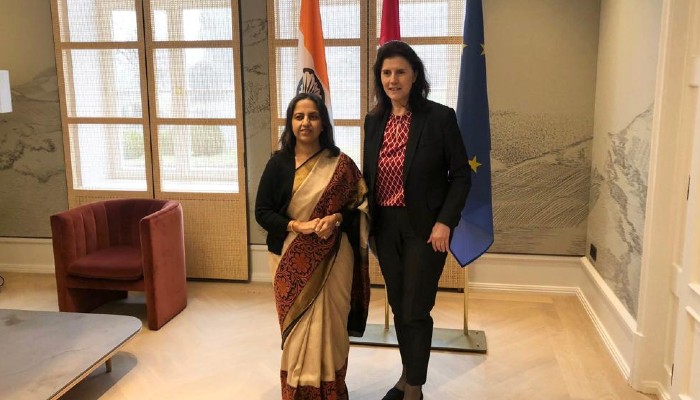 India and Luxembourg acknowledged the importance of the EU-India Strategic Partnership, guided by the EU-India 2025 Roadmap

India and Luxembourg on Friday held their first ever Foreign Office Consultations (FOCs) and reviewed the recent developments in their relations in light of the positive impetus given to the bilateral ties by the virtual summit held in November 2020.

During the consultations, both sides held wide ranging discussions on all aspects of bilateral relations and on ways to further expand economic links and deepen cooperation in areas of finance, steel, space, ICT, innovation, start-ups, manufacturing, automotive, sustainable development, renewable energy, and the fight against climate change.

Both sides noted with satisfaction that the investment proposal from Luxembourg’s B-Medical Systems could be operationalized within one year of their announcement, affirming the strong investment promotion and facilitation commitment of the Governments of India and Luxembourg, the MEA said.

Both sides agreed on the need to seek to advance more such concrete proposals in other areas of bilateral cooperation.

During the Consultations, institutionalized after the virtual summit between Prime Minister Narendra Modi and Luxembourg Prime Minister Xavier Bettel in November 2020, the two sides acknowledged the importance of the EU-India Strategic Partnership, guided by the EU-India 2025 Roadmap.

They appreciated the strong momentum in India-EU relations in recent years, particularly after the India-EU Leaders’ Summit at Porto in May 2021, which saw the launch of the India-EU Connectivity Partnership and the announcement of the resumption of the trade, investment and GI negotiations.

The Indian side also welcomed the announcement of EU’s Indo-Pacific Strategy and the launch of EU’s global Strategy on connectivity.

The resumption of the EU-India Human Rights Dialogue in April 2021, which nurtured a constructive engagement between both sides, was welcomed during the discussions, and both Co-Chairs looked forward to working together in the UN Human Rights Council during their coterminous mandates of 2022-24, the MEA added.

They reaffirmed their commitment to enhancing consultation and cooperation in regional and multilateral fora on matters of mutual and global interest, in particular the UN General Assembly, the UN Human Rights Council and the World Trade Organization,” it added.

The talks were held in a friendly and cordial atmosphere. It was agreed to hold the next round of Consultations in India at a mutually convenient time, the MEA further added.