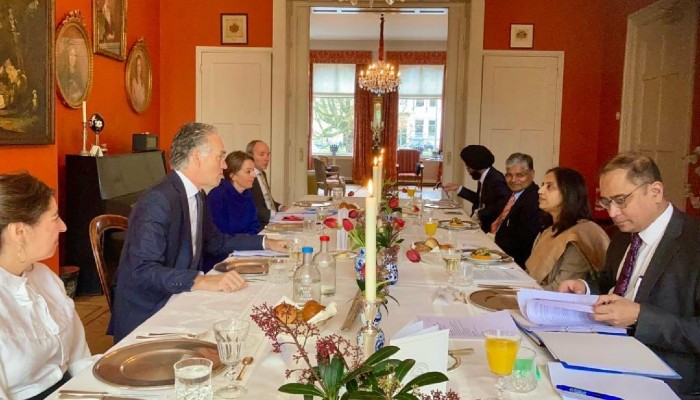 Foreign Office Consultations between India and the Netherlands were held on Wednesday.

India and the Netherlands share a strong bilateral relationship

India and the Netherlands on Wednesday deliberated on ways of bolstering cooperation in priority areas of agriculture, heath, Science and Technology (S&T), Climate innovation and renewable technologies. They also discussed implementing their bilateral Strategic Partnership on Water.

These were part of the discussuons during the Foreign Office Consultations between India and the Netherlands which were held on Wednesday in The Hague, Netherlands.

The Indian delegation was led by Reenat Sandhu, Secretary (West), MEA and the Dutch side was led by Paul Huijts, Secretary General, Dutch Ministry of Foreign Affairs, said a statement of the Ministry of External Affairs (MEA).

India and the Netherlands share a strong bilateral relationship, nurtured by the common values of democracy, rule of law, respect for human rights and the historic bonds of friendship.

The Foreign Office Consultations provided an opportunity to review the progress made since the Virtual Summit, it added.

The Indian side noted that the Netherlands continues to be among the top 5 investors in India and invited Dutch companies and institutional investors to take advantage of the huge opportunities opening up in India’s manufacturing, infrastructure and clean energy sectors.

This was a result of bold policy reforms and investment friendly initiatives taken by the Government of India such as the PLI Scheme, the National Asset Monetization Programme and the Gati Shakti Plan.

They expressed satisfaction at the growing India-EU relations and reiterated their desire for early implementation of the key outcomes of the India-EU Leaders’ Meeting in May 2021 including the resumption of negotiations on trade and investment agreements and the India-EU Connectivity Partnership, the MEA pointed out.

They also agreed to enhance cooperation at the United Nations and other international fora including G20.

The MEA further said that both sides appreciated the importance of regular bilateral exchanges at political and senior official levels and committed to intensify the same.

They also agreed to work together to commemorate 75 years of establishment of diplomatic relations between India and the Netherlands in 2022.
Attachments area