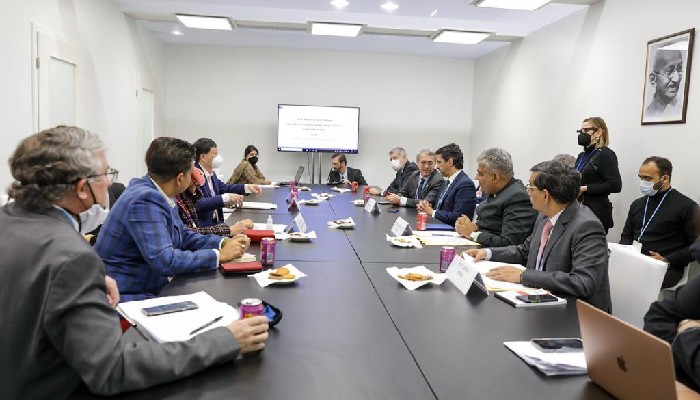 Brazil, South Africa, India and China—all members of BASIC, have pledged their full support to the United Kingdom COP26 presidency for a successful conference, which delivers an ambitious and balanced outcome, including the completion of the Paris Agreement Work Programme to facilitate the full implementation of the Paris Agreement and Nationally Determined Contributions (NDCs).

In a joint statement issued by these members of BASIC in Glasgow in UK, it was highlighted that despite the tremendous developmental challenges and pressures of poverty eradication, which have been exacerbated by the COVID-19 pandemic, the BASIC countries continue to lead from the front on climate change actions.

Ambitious climate change targets announced by BASIC are testimony to the seriousness that BASIC countries accord to tackling climate change, noted the joint statement.

At COP 26, Minister of the Environment of Brazil reassured the country’s full commitment to being part of the global response to tackle climate change by supporting the Glasgow Leaders’ Declaration on Forests and Land Use.

Brazil also announced new climate goals: (i) 50% of emissions reductions by 2030; (ii) zero illegal deforestation by 2028; (iii) restore and reforest 18 million hectares of forests by 2030; and (iv) achieve, in 2030, the participation of 45% to 50% of renewable energies in the composition of the energy matrix.

South Africa has submitted an updated and significantly more ambitious Nationally Determined Contribution (NDC) to the Paris Agreement ahead of COP26. The updated NDC brings forward the peaking of South Africa´s emissions by a decade and contains detailed information on adaptation and the enabling means of implementation support required from the international community.

While India is amongst the few countries whose NDCs are already compliant with the temperature goal of the Paris Agreement, Prime Minister of India Narendra Modi announced further enhancements to India’s Climate ambitions at the World Leaders’ Summit at COP 26 in Glasgow.

China aims to peak carbon dioxide emissions before 2030 and achieve carbon neutrality before 2060. For 2030, China will lower its carbon dioxide emissions per unit of GDP by over 65 percent from the 2005 level, increase the share of non-fossil fuels in primary energy consumption to around 25 percent, increase the forest stock volume by 6 billion cubic meters from the 2005 level, and bring its total installed capacity of wind and solar power to over 1.2 billion kilowatts, the joint statement said.

XI Jinping, President of the People’s Republic of China addressed at the World Leaders Summit at COP 26 in written statement and pointed out that we need to uphold multilateral consensus, focus on concrete actions and accelerate the green transition, it added.

BASIC Ministers highlighted that the BASIC and other developing countries have made the first move, coming forward with high ambition despite not bearing historical responsibility for causing climate change.

They now expect developed countries to show leadership and respond with a matching progression of effort. The positive sentiments expressed in the COP26 Summit should now be transformed into action and infuse the negotiating positions in the formal UNFCCC process.

In this regard, Ministers are concerned that climate finance provided by developed countries has fallen short of the USD 100 billion per year commitment by 2020 and that finance tends to be provided with unilateral conditionality and eligibility criteria, as well as in the form of loans, rather than grants, which aggravates the debt crisis.

Ministers underlined that developed countries must urgently step forward to fulfill their obligations and mobilize at least USD 100 billion per year from 2021 to 2025, and initiate, at COP 26, deliberations on a formal, transparent and open process for setting a new collective quantified goal on finance under the Paris Agreement, including through an inclusive forum for deliberation with a detailed roadmap outlining milestones for adopting a goal no later than 2023.

The new collective quantified goal must build from a floor of USD 100 billion per year, be significantly publicly funded with greater transparency and predictability and take a balanced approach towards mitigation and adaptation in light of the needs and priorities of developing countries.

Ministers expressed concern that Adaptation is not being accorded the balanced and substantive attention they deserve in the UNFCCC process. It is essential to develop a work programme to operationalize the Global Goal on Adaptation under the CMA.

Ministers emphasized that trust amongst Parties is central to the success of a multilateral process and that climate change can only be successfully addressed through a collective multilateral response. The history of negotiations and the past commitments must not be forgotten or erased.

In this spirit, it must be ensured that the discussions on pre-2020 action and support are not relegated to the background in this COP. The progress on the pre-2020 agenda should be the key benchmark of success of COP 26.

The developed countries must honour their pre-2020 commitments regarding mitigation, adaptation and means of implementation, without transferring any burden and responsibility to developing countries. Developed countries are required to take urgent actions to close the pre[1]2020 implementation gaps by 2023, which can be a useful input for facilitating discussions on progression of current commitments in the first Global Stock Take (GST)

Ministers underscored the importance of concluding the discussions on Article 6 of the Paris Agreement, in accordance with the mandates and principles set out in the Paris Agreement and the accompanying decision. Ministers emphasized the importance of keeping a balance of the mechanisms under Article 6.2 and Article 6.4 and that share of proceeds should be collected under Article 6.2, to contribute to the Adaptation Fund.

A decision on Article 6, including its governance would preserve the integrity and credibility of multilateral process, provide additional and predictable resources to the Adaptation Fund, and send a strong message to the private sector on their engagement and crucial role in achieving the objectives of the Agreement.

Any unilateral measures and discriminatory practices, such as carbon border taxes, that could result in market distortion and aggravate the trust deficit amongst Parties, must be avoided.

Ministers underscored the need for an Enhanced Transparency Framework that delivers a balanced outcome to strengthen the transparency within the UNFCCC, while providing much-needed flexibility for developing countries in accordance with their national circumstances and capabilities.

It is crucial to guarantee that all the efforts of developing countries to comply with their new transparency obligations will receive adequate technical and financial support.

Ministers underlined that COP 26 should achieve a balanced ambitious outcome reflecting all three priorities of the Paris Agreement namely mitigation, adaptation and means of implementation and emphasize the following: a) Preserve the nationally determined nature of NDCs corresponding to their highest possible ambition in the light of different capacities and national circumstances; b) Reflect Equity and the principle of Common.

But Differentiated Responsibilities and Respective Capabilities (CBDR-RC), in the light of different national circumstances, stated in Article 2.2 of the Paris Agreement; c) Conclude the negotiations related to Article 6 of the Paris Agreement; d) Send a strong signal to developed country Parties to fulfill their obligations without further delay and provide specific information on the provision of technical, financial and capacity building resources to developing country Parties representing a progression beyond previous efforts; recognize the significant role of public funds and cater to needs and priorities of developing country Parties; e) Promote climate justice by recognizing the fundamental equality of all people to pursue economic growth and sustainable development.