Persisting exclusion and inequality in Security Council membership needs to be addressed: India 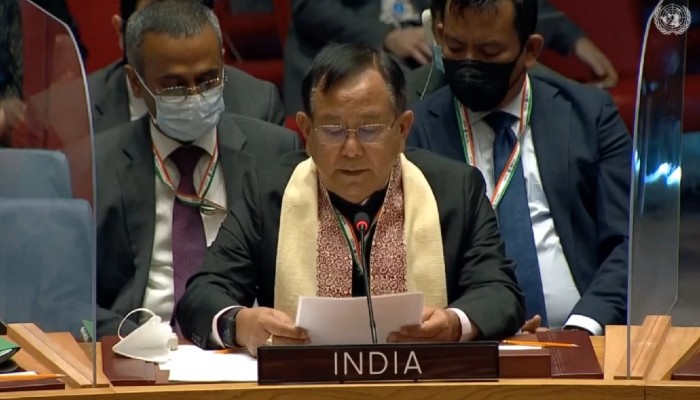 India on Tuesday called for addressing the persisting exclusion and inequality in the membership of the United Nations Security Council (UNSC).

India’s stand was expressed by Minister of State for External Affairs Rajkumar Ranjan Singh at the High Level Open Debate of the UN Security Council on ‘Exclusion, Inequality and Conflict’.

“Exclusion, inequality, and conflict are relevant to the functioning of this Council as well. The persisting exclusion and inequality in the membership of the Security Council needs to be addressed. The international structure for maintaining peace and security and peacebuilding needs to be reformed,” the Minister said.

“Global power and the capacities to address problems are much more dispersed today, than they were seventy-six years ago. How long rightful voices of the developing world including Africa can be denied?” he asked.

“We are therefore convinced that reformed multilateralism, with the reform of the UN Security Council at its core is crucial for dealing with the complex challenges of today's’ world,” Singh noted.

“These conflicts have, however, several long-standing political, economic and social causes which require attention not only of this Council but also of other organs of the United Nations which have specialized roles for peace-building and socio-economic development,” the MoS for External Affairs observed.

There is clearly much to be done to help the countries in intra-state conflicts to achieve sustainable peace, he maintained.
Offering a few observations in this context, Singh said the international efforts in the maintenance of peace and security need to be inclusive.

Noting that the spread of terrorism, particularly in the countries facing conflicts, can reverse the efforts of the international community, he submitted that it is therefore imperative that terrorism in any form or manifestation is condemned and those supporting it any manner are held accountable.

“The process of implementing a peace agreement must run along with the provision of humanitarian and emergency assistance, resumption of economic activity, and the creation of political and administrative institutions that improve governance and include all stakeholders, particularly women and disadvantaged sections,” he explained.

“We also need to avoid politicizing humanitarian and developmental assistance in conflict situations,” the Minister appealed.

Stating that the international community needs to walk the talk by ensuring a predictable and enhanced flow of resources to countries in the post-conflict phase, he said, the developmental assistance in line with the national priorities should go a long way towards sustainable peace.

The MoS for External Affairs stated that it is important to actively support the post-conflict reconstruction agenda, particularly in Africa.

“In this regard, the UN Peacebuilding Commission’s efforts should be strengthened. These efforts should include prioritizing the needs of the host state and coordinate the role of international financial institutions, the private sector and civil society organizations,” he submitted.

Arguing that some regional and sub-regional organizations have become more capable of addressing the conflict situations and member states have reposed faith increasingly in their capacity, Singh said, this has brought positive synergy to the actions of the United Nations and Security Council.

The Security Council has the responsibility to support this trend and encourage and enable those regional and sub-regional organizations, he pointed out.

“We believe that the existing framework of cooperation such as the Joint UN-AU Framework for an enhanced partnership in Peace and Security needs to be implemented more proactively,” the Minister said.