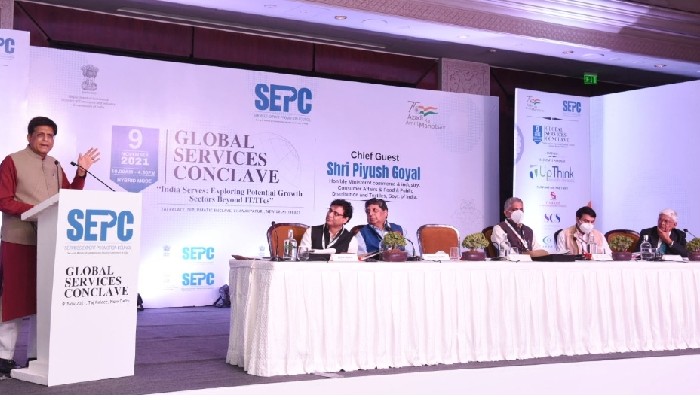 India is poised to achieve services export target of $1 trn by 2030, Union Minister of Commerce and Industry Piyush Goyal has said.

Addressing the 'Services Export Promotion Council- Global Services Conclave 2021” in New Delhi on Tuesday, he said that services were a key driver of India’s economic growth.

He pointed out that the services sector provides employment to nearly 2.6 crore people and contributes approximately 40% to India’s total global exports.

The Minister pointed out that in 2020, India became the 7th largest services exporter in the world, moving up the ladder by two positions. Services PMI rose to a decade high of 58.4 in October this year, he said.

Emphasizing that India had the potential to become the top services exporter in the world, Goyal said that the Services Sector was boosting India’s "transition from an Assembly economy to a Knowledge based economy".

Powered by Skills, Startups and IT Solutions, Indian services have the twin power of universal acceptance & universal attraction, the minister argued.

"Sectors like tourism, hospitality, etc. which suffered due to COVID-19, showing revival signs" he added.

Goyal pointed out that India's services expoets goday laegely comprise of IT/ITes. He stressed on the need to focus on other potential growth sectors.

The Minister listed certain crucial sectors which can catapult India’s services sector on a high growth trajectory such as Higher Education. He spoke of the massive potential for online training courses, language courses, the horizons of which have been further expanded by the New Education Policy.