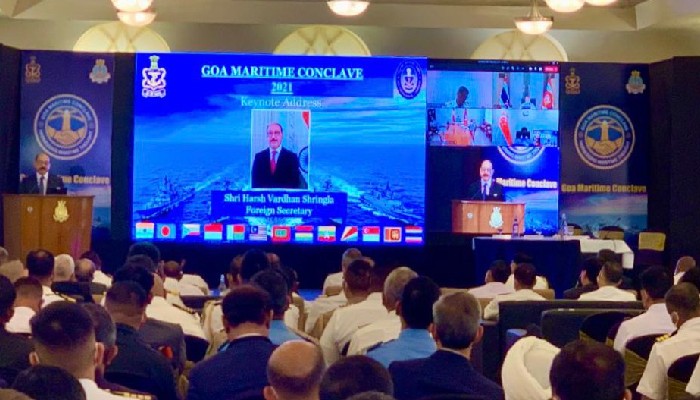 Prosperity and well-being of people of countries in the Indian Ocean Region are built on a foundation of law-and-order and security, he said

Maintaining that the Indian Ocean Region will face an increasingly complicated, rapidly evolving, and more demanding security situation, Foreign Secretary Shringla on Monday said India is ready and willing to do its share in tackling new threats and challenges.

“A lack of commitment to settled international law has led to an increased militarization of the region. Militarization always adds to complexities,” Shringla said in his remarks at the Goa Maritime Conclave on ‘Maritime Security and Emerging Non Traditional Threats: A Case for Proactive Role for IOR Navies.’

Organised at Naval War College in Goa, this was the third edition of Maritime Conclave which was attended by senior naval officials from Thailand, Indonesia, Bangladesh, Maldives, Malaysia, Myanmar, Mauritius, Singapore and Seychelles.

“A new cooperative architecture for our common maritime space that ensures security for its inhabitants, driven by our realities, and our aspirations to lead better lives, is necessary to grasp this opportunity,” he added.

The Foreign Secretary reiterated that India’s concept of the Indo Pacific is inclusive in nature.

India “supports an approach that respects the right to freedom of navigation and overflight for all in the international seas,” he said, adding that India’s Indo Pacific vision is premised upon the principle of ‘ASEAN-Centrality’.

India’s approach is based on cooperation and collaboration, given the need for shared responses to shared challenges in the region.

The Foreign Secretary said India’s commitment to UNCLOS and customary law of the seas, provide a direction and a framework for efforts to enhance public good in the Indian Ocean Region and the broader Indo-Pacific.

He said domain awareness is central to any preventive security strategy.

“The joint coastal radar surveillance systems that India has worked on with Sri Lanka, Mauritius, Maldives and Seychelles; the India-Bangladesh MoU on coastal radars; information fusion centers and multilateral maritime coordination centers in India, in Abu Dhabi, Seychelles and in Madagascar; and, White Shipping Information Exchange agreements, have, we can agree, improve not just domain awareness, but also the security situation,” Shringla said.

“Anti-piracy patrols in the Indian Ocean, in the waters of the Middle East and Africa, and the maritime coordinated patrolling agreements with Myanmar, Thailand, Bangladesh, and Indonesia, also improve security and understanding,” he added.

“We have supplied equipment, vessels and aircraft to friends like Vietnam, Mozambique, Maldives, Mauritius, Seychelles, Comoros, Bangladesh and Myanmar. We have also worked together to conduct training programmes, workshops and seminars and deploy mobile training teams,” Shringla added.