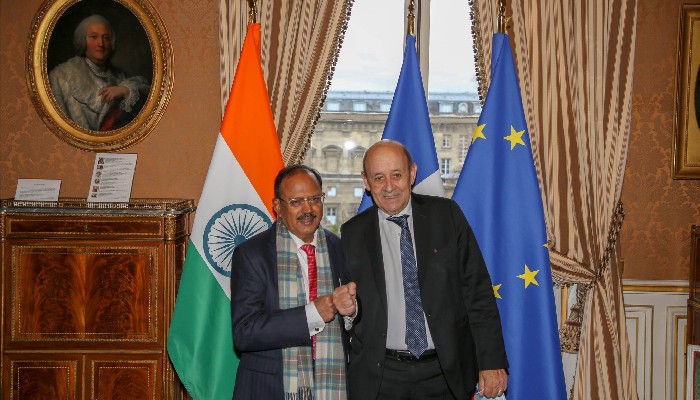 India and France call for stable and prosperous Indo-Pacific

Informing this, French Ambassador to India Emmanuel Lenain tweeted: “At his meeting with NSA Ajit Doval on the occasion of the 35th Strategic Dialogue in Paris, French FM @JY_LeDrian stressed France's commitment to deepening the Indo-French strategic partnership in all its dimensions.”

This meeting was held following a meeting between French President Emmanuel Macron and Indian Prime Minister Narendra Modi on the sidelines of the G-20 Leaders’ Summit in Rome, French embassy in India said in a statement issued on Friday.

During the strategic dialogue, the French embassy said, the French Foreign Minister stressed his country’s commitment to deepening the Indo-French strategic partnership and strengthening its various aspects, particularly in the areas of defence, space, civil nuclear energy and security.

French Foreign Minister Jean-Yves Le Drian underscored the importance of the mutual trust between France and India, as well as that of the Indo-French partnership in working to strengthen multilateralism and defend a free and open Indo-Pacific based on the rule of law.

The French embassy noted that Le Drian called for continued Indo-French coordination, including at the UN Security Council on Afghanistan, during the meeting with Indian NSA Ajit Doval.