India, Gambia agree to enhance bilateral engagements between them 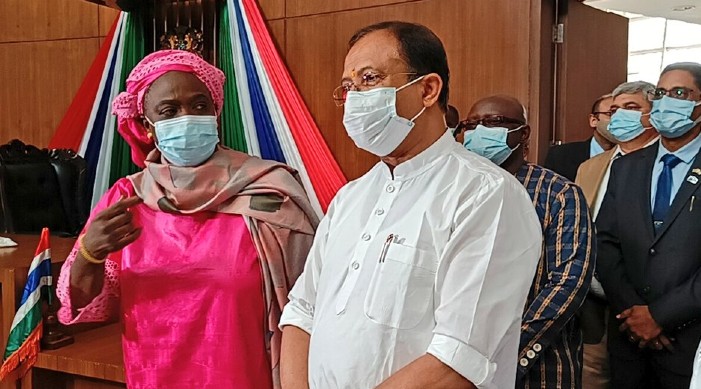 Minister of State for External Affairs V. Muraleedharan, who undertook a three-day (November 1-3) visit to Gambia, signed two agreements with the African country during his official trip, the Ministry of External Affairs said in a statement issued on Friday.

As per the MEA, the two agreements signed were: Exemption from visa requirement for holders of diplomatic and official passports and General framework agreement for cooperation between India and The Gambia.

Based on The Gambia’s request, repurposing of US $ 500,000 grant for procuring dialysis machines was announced during the visit.

MoS Muraleedharan also visited the National Assembly Building Complex of The Gambia in Banjul, which is one of the landmark projects in West Africa built under Line of Credit.

He also visited two ongoing Indian LOC projects, an Electrification expansion Project and a Water project of Replacement of Asbestos water pipes with UPVC in the Greater Banjul area. In addition, he also visited Katchikally Museum and University of The Gambia construction site, which is a Gambian Government project, being constructed by an Indian company.

According to the MEA, the visit comes as a follow-up to the first-ever state visit by President Ram Nath Kovind to The Gambia from July 30 to August 1, 2019.

During the visit, MoS Muraleedharan called on President of The Gambia Adama Barrow.

He also held discussions with Minister of Foreign Affairs, International Cooperation and Gambians abroad Dr. Mamadou Tangara on bilateral cooperation and reviewed the entire gamut of our bilateral relations.

During the visit, MoS Muraleedharan also met Speaker of the National Assembly of The Gambia Mariam Jack-Denton, and Minister of Higher Education, Research, Science and Technology Badara Joof.