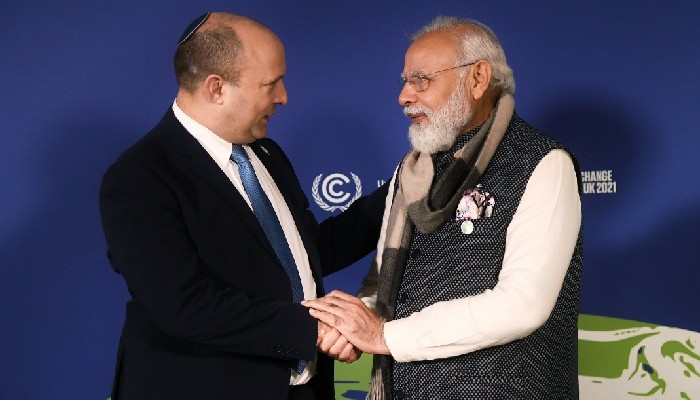 This was the first meeting between the two Prime Ministers.

The two leaders reviewed the bilateral strategic partnership and expressed satisfaction over the progress made in diverse sectors.

They agreed on further expanding cooperation, especially in the areas of high-technology and innovation, the Ministry of External Affairs (MEA) said.

This was the first meeting between the two Prime Ministers.

Recalling that next year would mark 30 years of the establishment of full diplomatic relations between India and Israel, Prime Minister Modi extended an invitation to PM Bennett to visit India, said the MEA.

Earlier, in a tweet about the meeting, the Indian Prime Minister's Office (PMO) had said, “Enhancing friendship with Israel. Prime Ministers @narendramodi and @naftalibennett had a fruitful meeting in Glasgow. Both leaders discussed deepening various avenues of cooperation for the benefit of our citizens.”

Prime Minister Bennett, in a tweet, said, "it was truly great to finally meet you, @NarendraModi."

The meeting between the two leaders comes after External Affairs Minister S Jaishankar, during his visit to Israel last month, extended an invitation to the Israeli premier on behalf of PM Modi to visit India.

India and Israel had elevated their bilateral relations to a strategic partnership during the historic visit of Prime Minister Modi to Israel in July 2017.

Since then, the relationship between the two countries has grown from strength-to-strength and has focused on expanding knowledge-based partnership, that includes collaboration in innovation and research, including boosting the 'Make in India' initiative.
Attachments area