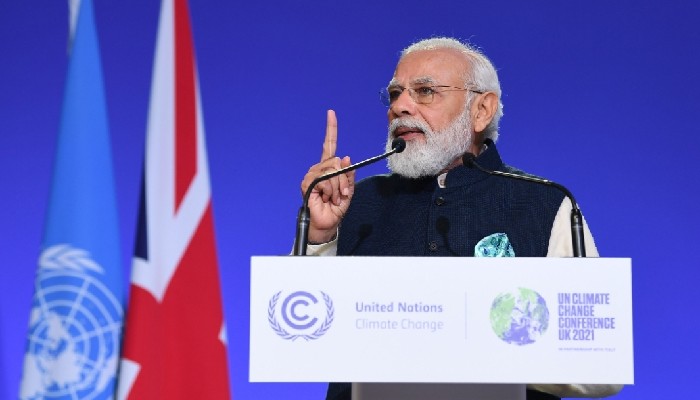 India will achieve the target of Net Zero Emissions by 2070, Prime Minister Narendra Modi has said.

Prime Minister Modi made this commitment as part of India's ‘National Statement’ at the COP-26 climate Summit in Glasgow, Scotland on Monday.

This is part of India’s five-point agenda for countering global warming and climate change.

“In the midst of this global brainstorming on climate change, on behalf of India, I would like to present five nectar elements, Panchamrit, to deal with this challenge,” said the Indian Prime Minister.

Second, India will meet 50 percent of its energy requirements from renewable energy by 2030.

Third, India will reduce the total projected carbon emissions by one billion tonnes from now onwards till 2030.

Fourth, by 2030, India will reduce the carbon intensity of its economy by less than 45 percent.

Fifth, by the year 2070, India will achieve the target of Net Zero.

“These panchamrits will be an unprecedented contribution of India to climate action,” he maintained.

Noting that today the whole world believes that India is the only big economy, which has delivered in letter and spirit on the Paris Commitment, Prime Minister Modi stated that the country making every effort with determination, working hard, and showing results.

He informed that India is at number four in the world in installed renewable energy capacity.

“India's non-fossil fuel energy has increased by more than 25% in the last 7 years and now it has reached 40 percent of our energy mix,” Modi added.

Intimating that India’s railway system has set itself a target of making itself 'Net Zero' by 2030, he said that this initiative alone will lead to a reduction of 60 million tonnes of emissions annually.

Today, India is working fast on many such initiatives with a strong will, he stated.

Pointing out that India has also given institutional solutions to cooperate with the world at the international level, Modi said, as a revolutionary step in solar power, India initiated the International Solar Alliance.

“We have created a Coalition for Disaster Resilient Infrastructure for climate adaptation. This is a sensitive and vital initiative to save crores of lives,” he noted.

Reckoning that the world is recognizing that lifestyle has a big role in climate change, the Indian Prime Minister proposed a One-Word Movement.

This can become a mass movement of Environmental Conscious Life Style, the Prime Minister suggested. “What is needed today is Mindful and Deliberate Utilization, instead of Mindless and Destructive Consumption,” he observed.

Noting that today, when India has resolved to move forward with a new commitment and a new energy, Prime Minister Modi said the transfer of climate finance and low cost climate technologies becomes more important.

He said that India expects developed countries to provide climate finance of $1 trillion at the earliest. Today it is necessary that as we track the progress made in climate mitigation, we should also track climate finance, Modi added.

“The proper justice would be that the countries which do not live up to their promises made on climate finance, must be pressured too,” he asserted.

Prime Minister Modi stated that India is moving forward on the subject of climate with great courage and great ambition.
India also understands the suffering of all other developing countries, shares them, and will continue to express their expectations, he assured.

Explaining that for many developing countries, climate change is looming large over their existence, he called for taking big steps today to save the world.