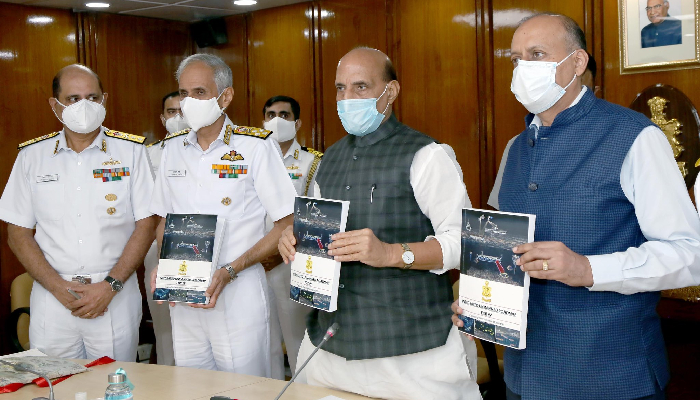 Defence Minister Rajnath Singh on Thursday stressed on the need to have a strong Navy due to the country’s increasing dependence on the seas for national development, and for proactive engagement with the world.

Speaking on the last day of the four-day (October 18-21) Naval Commanders’ Conference, he praised Indian Navy to have lived up to expectations of the nation by establishing a visible, credible and responsive presence in the Indian Ocean Region.

He also complimented Indian Navy for providing medical aid to South West Indian Ocean Region countries, as part of Mission SAGAR which is in lines with PM Narendra Modi’s clarion call for Security And Growth for All in the Region; undertaking various HADR Operations in the wake of natural calamities; and providing succour to civil populace during the second wave of COVID-19.

The Defence Minister highlighted that Indian Navy has spent more than two-thirds of the Modernisation Budget in the last five years towards indigenous procurement and out of 41 ships and submarines ordered by the Navy, 39 are from Indian shipyards, which is a testament to the Navy’s commitment to ‘Atmanirbhar Bharat’.

He urged Indian Navy to maintain the momentum achieved thus far and assured that the steps taken by the government will give it more strength to increase the lethal strike capability.

Rajnath Singh emphasized that P75(I) project would be one of the largest ‘Make in India’ projects and complemented Indian Navy on the successful maiden Sea Trials of the indigenously designed and built Aircraft Carrier ‘Vikrant’ by overcoming challenges, including COVID related imponderables.

The Defence Minister also highlighted training as an effective tool in bolstering naval diplomacy and commended the Indian Navy in providing training to foreign personnel in India for more than four decades.

Further, in keeping with the evolving technological transformation world over in unmanned systems, an Integrated Unmanned Roadmap for Indian Navy was also promulgated by the Defence Minister during the conference.