New Quad: Foreign Ministers of India, US, Israel and UAE agree to work together on economic and global issues 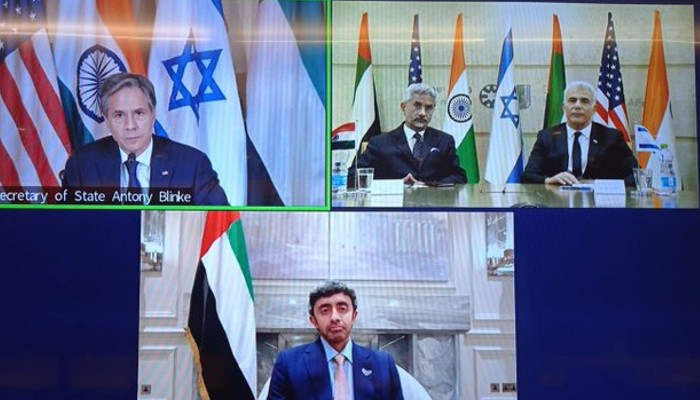 This was the first meeting of FMs of India, US, Israel and UAE and they agreed to work together on political, economic, regional and global issues

Described by some observers as a ‘new Quad’, it also focused on issues of political collaboration among the four countries.

After the US brokered the Abraham Accord between Israel and the UAE in 2020 a new development on geopolitical turf has taken place in the West Asian region with India stepping up cooperation with Tel Aviv and the UAE on trade and investment front. While India has a robust defence and security cooperation with Israel, the UAE is a key energy partner and also a home to more than three million Indians.

India’s security cooperation with the UAE is also growing rapidly with the first-ever visit by an Indian Army Chief taking place last year. The US is India’s key strategic partner with both enjoying healthy and cooperative relations on defence, technology, trade and investment fronts.

The maiden meeting of foreign ministers of these four countries has given them an opportunity to come together when the geopolitical scenario in the world in the post Covid situation is changing fast.

“Today, I met with Israeli Foreign Minister Yair Lapid, Indian Foreign Minister Dr S Jaishankar and Emirati Foreign Minister AB Zayd about shared issues of concern in the region and globally, and the importance of expanding our economic and political collaboration,” US Secretary of State Antony Blinken tweeted after the first meeting of the foreign ministers of India, Israel, the UAE and the US.

The Israeli Foreign Minister too tweeted about the meeting: “Last night, I participated in a virtual meeting with Secretary Blinken, Dr S Jaishankar and AB Zayed. We decided to establish an international forum for economic cooperation and discussed possibilities for joint infrastructure projects in a wide range of fields.”