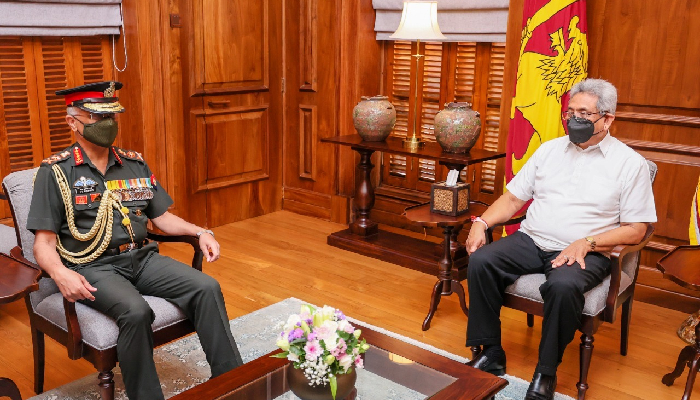 Indian Army Chief MM Naravane who is on a four-day state visit to Sri Lanka on Wednesday called on Sri Lankan President Gotabaya Rajapaksa and discussed issues of mutual and strategic cooperation.

During the course of the day, the visiting Indian Army Chief also called on General GDH Kamal Gunaratne, Secretary of the Sri Lankan Ministry of Defence and discussed steps to take forward the excellent defence cooperation between India and Sri Lanka, the Indian Army noted.

Sri Lanka’s leading role as a partner in security was appreciated including within the Colombo Security Conclave initiative.

On Tuesday, General Naravane arrived in Colombo at the invitation of General Shavendra Silva, Chief of Defence Staff and Commander of Sri Lanka Army, said a statement of the Indian High Commission in Sri Lanka.

In the remainder of his visit, the Indian Army Chief, would also witness Exercise Mitra Shakti, one of the largest bilateral military exercises in the region, the statement by the Indian High Commission in Sri Lanka further said.

The Indian Army Chief will also participate in Gajaba Day celebrations as the Chief Guest.

General Naravane is also scheduled to deliver a talk at DSCSC, Batalanda and interact with students and faculty, the statement said.

The visit symbolises strong relations and close cooperation shared between the two countries, it stated.