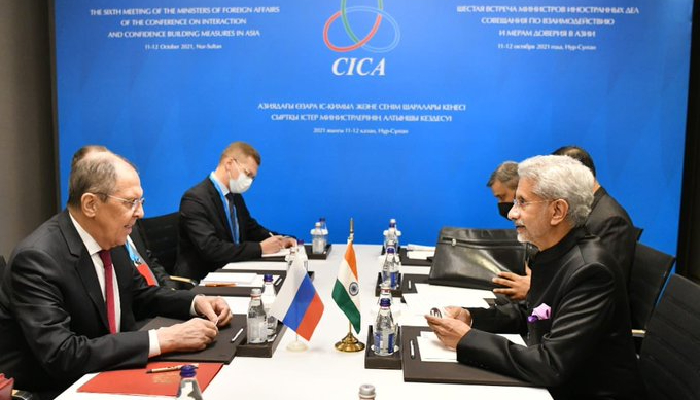 International community must unite against terrorism as seriously as it does on climate change and pandemics, Jaishankar said

External Affairs Minister S Jaishankar on Tuesday held a meeting with his Russian counterpart Sergey Lavrov on the sidelines of the Conference on Interaction and Confidence-Building Measures in Asia (CICA) Foreign Ministers’ Meeting in Nur-Sultan in Kazakhstan and reviewed progress in bilateral cooperation between the two countries.

The two Ministers also exchanged notes on Afghanistan and the Indo-Pacific.

Tweeting about it, EAM Jaishankar wrote: “Good to catch up with Russian FM Sergey Lavrov on the sidelines of the CICA meeting in Nur-Sultan. Noted the progress in our bilateral cooperation. Exchanged notes on Afghanistan and the Indo-Pacific.”

Earlier, the EAM obliquely attacked Pakistan by stating that cross-border terrorism is not “statecraft”, instead another form of terrorism and international community must unite against this menace as “seriously” as it does on issues like climate change and pandemics.

Addressing the CICA meeting, he said: “If peace and development is our common goal, the biggest enemy we must overcome is terrorism. In this day and age, we cannot countenance its use by one state against another.”

“Any calculation that extremism, radicalisation, violence and bigotry can be used to advance interests is a very short-sighted one. Such forces will come back to haunt those who nurture them. Lack of stability will also undermine our collective efforts to get Covid under control. The situation in Afghanistan is, therefore, of grave concern,” he added.

Ensuring that Afghan territory is not used for supporting terrorism and promoting the formation of an inclusive Government are widely recognized as priorities, External Affairs Minister S Jaishankar has said.

“Recent developments in Afghanistan have generated understandable concern in the region and beyond,” he pointed out.

“The voice of CICA can be a positive factor in shaping the response of the international community,” he noted.

The EAM also stressed connectivity to promote economic and social activity. But at the same time, he maintained that respect for sovereignty and territorial integrity must be given a priority.

“As we build these modern arteries of commerce, it is absolutely essential that the most basic principles of international relations are observed. Respect for the sovereignty and territorial integrity of nations rank foremost among them. It is also important that connectivity building is a participative and consensual exercise, based on financial viability and local ownership. They must not serve other agendas,” the EAM said.