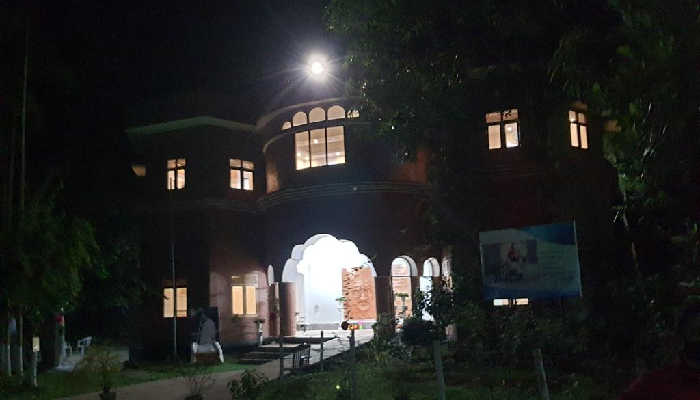 On the occasion of Gandhi Jayanti, a renovated museum was inaugurated at Noakhali in Bangladesh on October 2, 2021.

While commemorating International Day of Non-violence and 152nd Birth Anniversary of Mahatma Gandhi, a renovated Gandhi Memorial Museum was inaugurated in Noakhali in Bangladesh on Saturday.

The renovation of the unique Museum housed inside the Gandhi Ashram campus was supported by India.

Distinguished guests visited the Gandhi Memorial Museum and appreciated the unique display of memorabilia and artifacts related to Mahatma Gandhi.

A discussion on ‘Ahimsa, Satyagraha and the Mahatma – Revisited’ was also organized on the occasion.

Speaking on the occasion, High Commissioner Vikram Doraiswami said that Gandhiji’s life and his message holds relevance even today.

He recalled the remarks made by the Prime Minister of Bangladesh, Sheikh Hasina during a UN event organized to commemorate 150 years of Mahatma Gandhi in 2019.

She had said that Gandhi's love for common people and ideals of non-violence contributed to shaping Bangabandhu’s vision of struggle against oppression and tyranny perpetrated by the then regime.

He also expressed his delight that during Mujib Borsho, the Bangabandhu-Bapu Digital Exhibition was on display in Bangladesh.

He invited the audience to visit the Bangabandhu-Bapu Digital Exhibition that is on display in Dhaka till 11 October, 2021 and would later on move to Chattogram, Sylhet, Khulna and Rajshahi.

He said that the exhibition celebrates in a uniquely thematic way, the life and legacy of the Fathers of each of the two Nations, Mahatma Gandhi and Bangabandhu Sheikh Mujibur Rahman.

Recalling the influence of the Mahatma on Bangabandhu Sheikh Mujibur Rahman, Bangladesh Foreign Minister Momen highlighted the continuing relevance of Gandhi’s principles of truth, non-violence and communal harmony and his deep environmental concern.

A dance drama based on Rabindranath Tagore’s Chandalika was specially presented by Spandan Cultural Center from Dhaka on the occasion.

Mahatma Gandhi had toured hundreds of villages in Noakhali in 1946-47. He had camped there for four months and toured the district in a mission to restore peace and communal harmony.

Gandhi Ashram Trust was established at Noakhali in 1946 to propagate Gandhian philosophy of rural development, peace and social harmony.