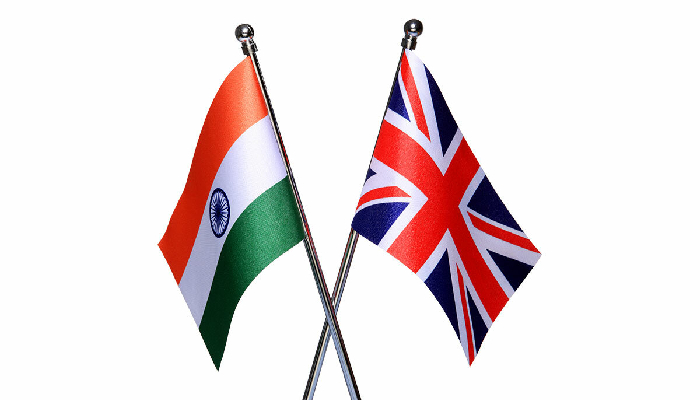 Flags of India and the UK--Image for representational purposes

India-UK Consular Dialogue is a part of the 2030 Roadmap, unveiled during the virtual summit between the two countries in May

India and the United Kingdom on Wednesday held their first Consular Dialogue through video conferencing and discussed ways to further strengthen people-to-people contacts between the two countries.

According to the Ministry of External Affairs, as part of the India-UK 2030 Roadmap, the two countries also discussed ways to facilitate consular access and early resolution of consular grievances including through systematic information sharing and cooperation on visas, extradition cases and mutual legal assistance.

At the Consular Dialogue, while the Indian delegation was led by Devesh Uttam, Joint Secretary (CPV), Ministry of External Affairs, the UK side was led by Jennifer Anderson, Director Consular Services, Foreign, Commonwealth and Development Office.

Both sides agreed to hold the next round of this Dialogue in 2022, in London, at a mutually convenient date.

Earlier, during India-UK virtual summit held on May 4, 2021, both sides had agreed for a closer cooperation in consular matters and to resolve long-running or complex consular cases, develop working-level arrangements to promote safe travel for the millions of Indian and British nationals who travel between the two countries each year, ensuring they are able to access first class consular services when required.

The two countries had also agreed to establish a working mechanism on cooperation in consular crises, including consular crises in third countries and on best practice for crisis preparedness and crisis management.

India and the UK are committed to a strong partnership for their mutual benefits.