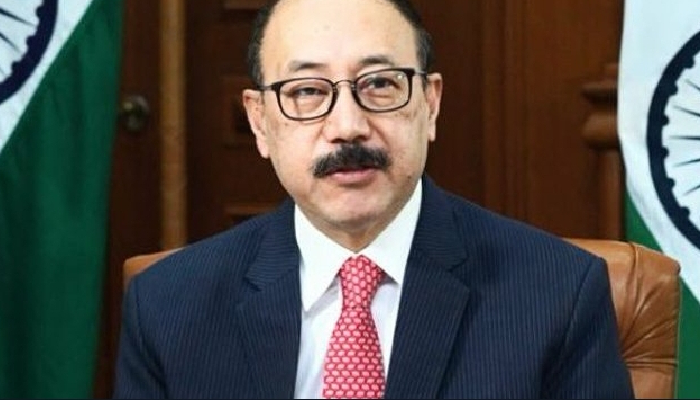 Reiterating that multipolar focus is one of the five pillars of Indian diplomacy that would help it navigate the turbulent and challenging international environment, Foreign Secretary Harsh Vardhan Shringla has said India places its Neighbour First, it Acts East and Thinks West.

In his address on ‘India's Foreign Policy and Its Strategic Imperative: The Way Forward’ at the 6th JP Morgan on India Investor Summit in Monday, Foreign Secretary Shringla stated that these policies have been revitalized with a focus on concrete outcomes.

He informed that a massive effort has been made to improve connectivity in our neighbourhood through road, railway, inland water and multi-modal linkages.

Railway projects with Bangladesh and Nepal; Chabahar and Sittwe Ports in Iran and Myanmar; and multi-modal transport corridors in Bangladesh are just some concrete examples of progress, Shringla argued.

He noted the importance of creating a power trading system in our neighbourhood, with the appropriate regulatory framework; with the linking of energy grids of India, Bangladesh, Bhutan, Nepal and Myanmar; and with Indian investments in power projects in Bangladesh, Bhutan and Nepal.

These steps to create a linked energy space are being augmented by hydrocarbon pipelines that can link India with Nepal and Bangladesh, the Foreign Secretary added.

He highlighted that outside the immediate concentric circle of our neighbourhood, our SAGAR – Security and Growth for All in the Region – policy underpins our vision of the Indian Ocean region and the greater Indo-Pacific region.

Shringla maintained that India’s Act East policies will link India through multiple channels to ASEAN and thence to East and South East Asia, one of the most economically dynamic regions of the world, and to the Indo-Pacific.

India’s North East, which is being transformed by connectivity projects, will provide a land bridge with ASEAN, he stated.

BIMSTEC, IORA and frameworks such as Ganga Mekong Cooperation also bring us closer to ASEAN, he added.

Explaining that India’s think West policies have led to major positive changes in the content and tone of our relationships in West Asia, the Foreign Secretary said beyond our immediate and extended neighbourhood, we have maintained comprehensive strategic relations with major powers while maintaining strategic autonomy.

Referring to India's participation in the first in-person Quad summit in the United States next week at the invitation of President Joe Biden, he held that the agenda of cooperation under the Quad framework is constructive and diverse.

The four Quad countries are engaged on issues of connectivity and infrastructure, emerging technologies, climate action, education, and most important of all, COVID-19 responses – which include vaccines collaboration, and resilient and reliable supply chains, Shringla informed.

Arguing that the Quad Summit, follows a BRICS Summit and India’s presidency of the UN Security Council, he said the tempo of our diplomatic calendar conveys a deeper truth. India is committed to multilateral and plurilateral solutions and understandings.

The Foreign Secretary recalled that India is negotiating trade arrangements with both the European Union and with the United Kingdom, with UAE and Australia, among others.

He said that plurilateral structures such as the Shanghai Cooperation Organisation – Regional Anti-Terrorism Structure (SCO RATS) and BIMSTEC National Security Advisors meetings are being utlilzed to project Indian security concerns.

Our engagement with Africa and our engagement with the Global South continue apace. More resources are being deployed through development partnership and through new-age initiatives such as the International Solar Alliance and the Coalition for Disaster Resilient Infrastructure, the foreign secretary said.

According to him, the pandemic took place in the midst of a larger geopolitical and ideational shift. Several parallel megatrends were already in operation before Covid descended upon us.

Shringla observed that the first of these is the phenomenon of rebalancing in which global activity is moving towards Asia.

He said Increasing economic output and dynamism in Asia, including India, is redistributing global GDP in a manner that is more consistent with the long-term historical record.

The second major megatrend is the rise of China. This has geotechnical, geo-economic and geopolitical consequences, he illustrated.

Stating that the unipolar moment that arose after the fall of the Berlin Wall and the end of the Cold War has waned, Shringla reckoned that International relations theory tells us that a change in power equations of this nature causes friction.

Thirdly, this rebalancing is taking place in the context of an international system that is being severely tested, he submitted.

The main pillars of this system, the United Nations, the Bretton Woods Institutions and the world trade edifice, the G7, and the network of regimes and structures that were built on this foundation, were constructed after the Second World War, Shringla informed.

Referring to these treaties and agreements as ‘mainstream concepts of globalization’, he said they are the intellectual and structural pillars of the world order as we commonly understand it.

The Black Swan event that has been the pandemic has, most of us will agree, highlighted the inadequacies of the current structure and the thinking that underlies it, the Foreign Secretary emphasized.

Fourthly, the current pillars of macroeconomic theories are under stress, he reckoned.

A tardy recovery from the 2008 financial crisis and a slowdown in global trade are challenges independent of and predating the pandemic induced slowdowns, Shringla said.

He added that economic realities imposed by the disruptions of the pandemic have further upended many of the assumptions underlying current economic and trade policies.

Amongst other things, supply chains and global value chains, one of the main pathways by which economies are interlinked and globalized, have demonstrated that they become vulnerabilities rather than strengths, Shringla recalled.

Fifthly, new and emerging technologies have proven critical in transmitting ideas, knowledge and economic outreach to millions of people across the globe, he observed. However, they can also be disruptive, and used by bad actors, he added.

Stating that this offers a particular challenge to democracies and open societies, the Foreign Secretary remarked that After all, infodemics are as great a threat as pandemics.

He said technology and the Internet have created a whole new spectrum of sub-conventional security challenges.

Responses to such threats to peace and security need to be as nimble and dynamic as the threats and challenges themselves, Shringla said.

Sixth and last, we are faced, for the first time after the fall of the Berlin Wall, with a battle between schools of thought, he pointed out.

Maintaining that unlike in the Cold War, however, the schools of thought are not always divergent, Shringla said they have significant intersections. While, competition and cooperation coexist, he recalled it is a system in which rivalries and alliances are non-linear.

According to the top diplomat, the turbulent and fast-changing international environment impacts the strategic and operating environments of governments and businesses.
Attachments area