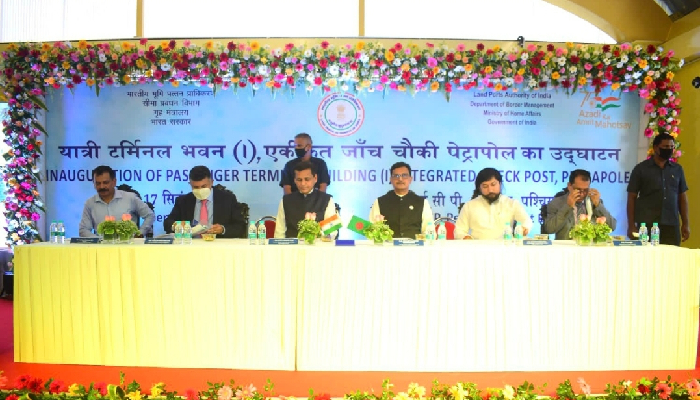 The building was jointly inaugurated by ministers from India and Bangladesh.

In a major boost to modernization of border infrastructure and to further strengthen India’s connectivity with Bangladesh, a new Passenger Terminal Building was inaugurated at Integrated Check Post (ICP) Petrapole on Friday.

During the inaugural ceremony, a foundation stone of a common second cargo gate along the India-Bangladesh border was also laid, the Indian High Commission in Bangladesh said in a statement.

From the Indian side, the inauguration was done by Union Minister’s of State for Home Affairs, Nityanand Rai and Nisith Pramanik. From the Bangladesh side, Khalid Mahmud Chowdhury, Minister of State for Shipping, Government of Bangladesh was the Chief Guest.

The inauguration took place in the presence of Vikram Doraiswami, High Commissioner of India to Bangladesh.

ICP Petrapole, the largest land port in South Asia, is the most important port for passengers coming from Bangladesh. It is also the ninth largest international immigration port of India, handling about 23 lakh passengers annually.

Built by the Land Ports Authority of India, the new Passenger Terminal Building (I) is spread across an area of 1,305 Sqm and is designed to handle around 550 passengers at any point of time.

It will facilitate smooth and comfortable movement of passengers and is equipped with facilities such as Immigration, Customs and Security under one roof.

LPAI is also in the process of constructing a new state-of-the-art Passenger Terminal Building (II) at ICP Petrapole which is planned to cater to half a million handling capacity. The construction work commenced in February 2020 and is expected to be completed by end of 2022.

By setting an example of strong Border Agency Coordination between LPAI and BLPA, this move is expected to speed up the release/clearance of goods at the border crossing through a better institutional arrangement and further enhance bilateral trade and connectivity between the two countries.

Chairman of the Land Ports Authority of India Aditya Mishra and Additional Secretary and Chairman of Md. Alamgir Bangladesh Land Port Authority were also present on the occasion.