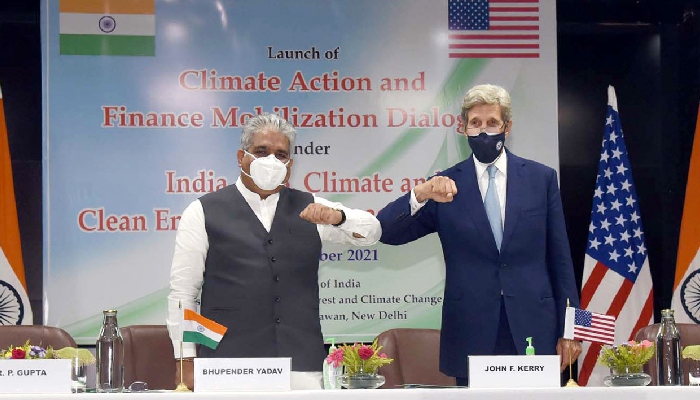 India and the United States of America launched the 'Climate Action and Finance Mobilization Dialogue (CAFMD)' on Monday.

The dialogue was formally launched by Union Minister of Environment, Forest and Climate Bhupender Yadav and US Special Presidential Envoy for Climate (SPEC) John Kerry at an event held in New Delhi.

The partnership was announced by Prime Minister Narendra Modi and US President Joe Biden at the Leaders Summit on Climate held in April 2021.

The US Climate envoy lauded India’s leadership role in demonstrating how economic development andclean energy can go hand in hand and stated that urgent Global Climate Action is the need of the hour.

Kerry stressed that India and US are working towards speedier deployment of clean energy, an official press release issued after the event said.

The dialogue will not only strengthen India-US bilateral cooperation on climate and environment but will also help to demonstrate how the world can align swift climate action with inclusive and resilient economic development, taking into account national circumstances and sustainable development priorities, Yadav said at the launch event.

“India and the United States are natural partners with shared values and our agenda encompasses all major pillars of our strategic priorities - including defence, security, energy, technology, education and healthcare,” said the Environment Ministeremph

This is Kerry’s second visit to New Delhi since his appointment to this role.

The visit has been described by the State Department as a part of the US initiative to bolster climate efforts ahead of the 26th Conference of the Parties (COP26) to the United Nations Framework Convention on Climate Change (UNFCCC).