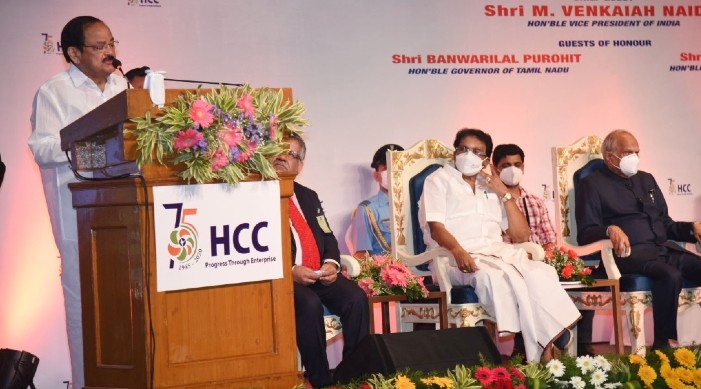 All indicators point to a long-term phase of growth and recovery in the coming months, VP Naidu said

The Indian economy has the potential to reach the US$ 5 trillion mark in the coming years, Vice President M Venkaiah Naidu has said.

Even though the Covid second wave has slowed down revival, the Indian economy has turned around and is firmly set on the path to recovery, he said on Saturday.

Speaking at the Platinum Jubilee Celebrations of the Hindustan Chamber of Commerce in Chennai, he expressed happiness over foreign investment in India.

“The Indian economy has the potential to reach the US$ 5 trillion mark in the coming years because of strong macro-economic fundamentals, forward-looking reforms, opening up of FDI and improving the ease of doing business,” the Vice President said.

Stating that India stands poised on the cusp of economic transition, he said all indicators point to a long-term phase of growth and recovery in the coming months. Based on different markers, the Reserve Bank of India (RBI) has retained the growth projection of 9.5 per cent for 2021-22, he noted.

VP Naidu added that the Centre and States should work in a Team India spirit for the long-term revival of the economy. He also stressed that promoting Public-Private-Partnership in different sectors.

The Vice President also used the opportunity to appeal to the citizens to get vaccinated for COVID-19. He called it their ‘Pavitra Kartavya’ or responsibility towards their family, community and the nation.

Observing that India is blessed with a huge population of educated, talented youth and a vast pool of scientific manpower, VP Naidu said there has to be a greater focus on creating the right ecosystem for innovation to thrive by enhancing investments in R & D.

The Vice President also wanted bodies like the Hindustan Chamber of Commerce to take up training and upskilling of youth and ensure that they not only become employable but also are capable of self-employment.

Referring to the recent statement of Tamil Naidu Chief Minister M K Stalin on the need to rewrite history, the Vice President said that the history of the Indian sub-continent must be rewritten with an Indian perspective and not through a colonial lens.