‘Will continue to be a force-multiplier for peace building ‘: India at UNSC 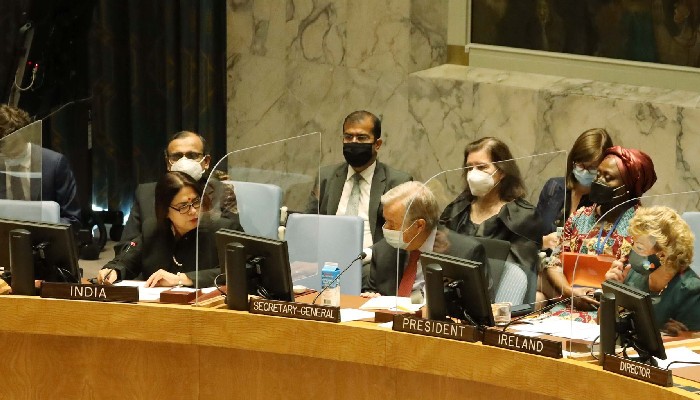 India will continue to be a force-multiplier for peace-building with an emphasis on a human-centric approach, said India’s Minister of State for External Affairs, Meenakashi Lekhi while addressing the UN Security Council Open debate-‘UN Peacekeeping Operations: Transitions’ on Wednesday.

“India’s contributions in the area of human-centric peace-building and post-conflict reconstruction work in Africa are well-known,” the MoS for External Affairs said.

“India’s fundamental approach to peace-building efforts is to respect national ownership and to be guided by the host state’s development priorities,” she noted.

“We are convinced that human-centric, gender sensitive and technologically prime solutions and the robust functioning of democratic institutions of governance that give all stakeholders a say in creating a better future is the success of peace-building and for sustaining peace,” Lekhi added.

“Going forward India will continue to be a force-multiplier for peace building within emphasis on human centric approach,” she exclaimed.

“We also remember the 4,089 peacekeepers who have laid down their lives and whose courage and bravery of India’s 174 peacekeepers who made the ultimate sacrifice in the line of duty,” she pointed out.

Stating that India is the largest troop contributor to the UN peacekeeping operations in the cumulative terms and since their inception having deployed 2,50,000 peacekeepers across 49 UN missions, Lekhi said that this bears testimony to India’s commitment towards contributing a reliable, well-trained and highly professional peacekeeping force.

“As of today India’s nearly 5,500 peacekeepers are deployed across 9 UN missions. India was also happy to donate vaccines for all UN peacekeepers and upgrade two of our hospitals for peacekeeping to combat the pandemic,” she informed.

“We take pride in the fact that the first ever all-woman peacekeeping contingent was from India and stationed in Liberia,” the Minister added.

She said, “UN peacekeeping missions have been playing an important role bringing about peace and stability in countries of deployment despite numerous operational challenges.”

The Indian Minister of State for External Affairs pointed out that one of the major challenges that continue to hamper peacekeeping operations has been the transition phase from peacekeeping to peace-building.

“For the host country, on one hand the signals progress towards political stability and new development opportunities, but on the hand it also presents a real risk of a country relapsing into conflict,” Lekhi argued.

“The transition of peacekeeping operations to peace-building depends on several factors including the way such transitions are envisaged, planned and executed by the UN,” she highlighted.

“To be successful, this critical phase needs the active collaboration of all stakeholders,” the Minister submitted.