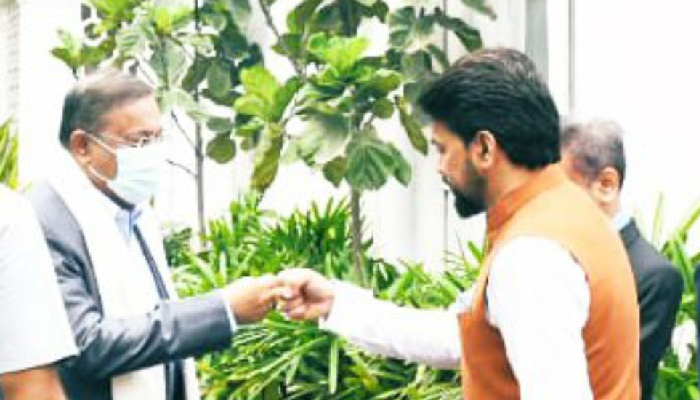 India and Bangladesh on Tuesday discussed steps to further strengthen the strong ties between the two countries in the areas of broadcasting and entertainment.

They also talked about ways to deepen people-to-people contact and explore the potential of soft power interface between the two countries.

According to an official press release, Mahmud appreciated the pro-active steps taken by the Indian Government and made special mention of the visit of Prime Minister Narendra Modi to Bangladesh in March this year.

During the meeting, Union I&B Minister Thakur expressed satisfaction over the production of the movie ‘Bangabandhu’ on the life and times of Sheikh Mujibur Rahman.

A ‘major part' of the production had been completed, he said, adding that the project was likely to be over by March, 2022, if the COVID situation permits, so that the movie could be released internationally.

During the meeting, it was also agreed to pro-actively pursue production of the documentary film on ‘Liberation of Bangladesh in 1971’.

Discussions took place on strengthening of ties between the two countries in the areas of digital entertainment and screening of films of each other’s country through mutual exchange.

The two Ministers also discussed the celebration of ‘Maitri Diwas’ on 6th December, 2021 for which a mutually accepted Action Plan would be detailed and carried out, the release said.

Bangladesh and India are marking twin anniversaries this year - the Birth Centenary of the Father of the Nation Bangabandhu Sheikh Mujibur Rahman and 50 years of establishment of diplomatic relations between India and Bangladesh.

On Monday, Bangladesh Information Minister Mahmud had inaugurated the Bangabandhu Media Centre at the Press Club of India (PCI).

The media centre has been set up with the support of the Bangladesh High Commission in India to mark the birth centenary of the founding President of Bangladesh, ‘Bangabandhu’ Sheikh Mujibur Rahman.
Attachments area