Days of unilateralism are over: Jaishankar 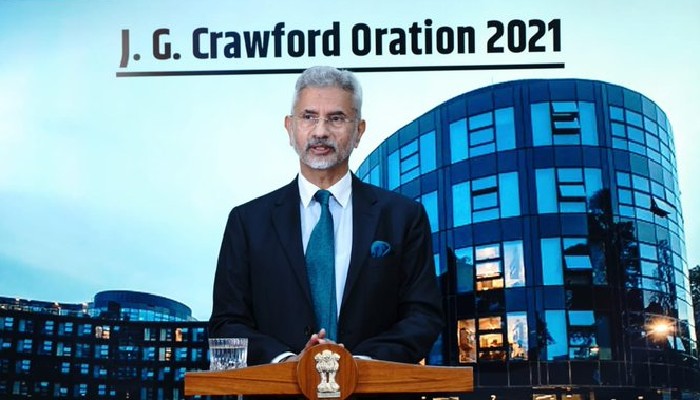 EAM S Jaishankar at the JG Crawford Oration 2021 at the Australian National University on September 6, 2021.

India has seen “real transformation” in its relations with the United States, Japan and Australia, said the External Affairs Minister

External Affairs Minister S Jaishankar on Monday said days of unilateralism are over, bilateralism has its own limits, and “as the Covid reminded us, multilateralism is simply not working well enough.”

“The resistance to reforming international organizations compels us to look for more practical and immediate solutions. And that is the case for the Quad,” the EAM said in his remarks at the JG Crawford Oration 2021 at the Australian National University.

He said in the last two decades the world has undergone quantum shifts along with more organic change.

“The geo-political turbulence in the Indo-Pacific, the ripple implications of the Afghanistan withdrawal and the larger consequences of the Covid pandemic are three such current examples. Those who connect the dots would surely agree that we are really now at the cusp of something big. As we seek to discern the outlines of what emerges next, there is no question that the Indo-Pacific would be very much at its core,” the EAM said

He said the Quad nations are all democratic polities, market economies and pluralistic societies. Apart from that natural understanding that it generates, similarity in the structural aspects of their relationships has helped to foster the platform.

“In each case, there are regular meetings at the Summit level, designated formally as annual in the case of Australia and Japan. All the bilateral ties now include a 2+2 Defence and Foreign Ministers’ interaction,” Jaishankar said.

“All four countries are members of ASEAN-led forums, including the East Asia Summit, the ASEAN Regional Forum and the Defence Ministers Meeting. They also strongly subscribe to the centrality of ASEAN in so far as the Indo-Pacific. Between them, these four are involved in multiple trilateral combinations with other partners. In the case of India and Australia, they include those with France, Indonesia and Japan,” the EAM said.

He said, “The working of the Quad takes into account the consequences of globalization, requirements of the global commons and the expression of converging interests. The Malabar exercise is cited most often as its example. But Quad’s expanding agenda affirms a declared intention to promote greater prosperity and ensure stability in the Indo-Pacific-so, it should not be seen narrowly.”

In the last two years, it has focused on challenges that vary from maritime security, cyber security and disaster response to connectivity and infrastructure, climate action and counter-terrorism.

“In keeping with the challenges of our times, it has also chosen to get involved with vaccine production, student mobility, resilient supply chains and combating disinformation. This sends a clear message when it comes to the genuine requirements today of the international community,” he said.

Talking about India -China relations, he said how former Indian Prime Minister Rajiv Gandhi went to China in 1988 to boost New Delhi's relationship with Beijing predicated on the fact that the border would be peaceful and tranquil. “We did that by a series of agreements which built confidence, which said don't bring your military to the border,” Jaishankar said.

“After 1975 when we had a relatively small clash, we actually had no fatalities on the border. Yet what we saw last year was a complete departure. There was a very large Chinese military presence in very operational mode at the border without a good reason,” the EAM said.

Dwelling on the Galwan Valley clash in Eastern Ladakh in June last year, he said how it led to the loss of lives on both sides of the Line of Actual Control between India and China. “It has taken the relationship in a completely different direction,” Jaishankar said, adding, “In India, the challenge of how to manage our relationship with China ranks very very high.