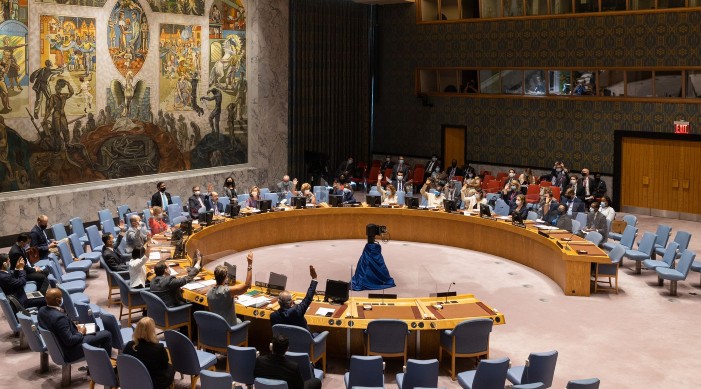 With the US completing the process of its troop withdrawal from Afghanistan where fear and uncertainty amid rising incidents of violence have increased manifold, India as the rotating President of the UN Security Council on Tuesday passed Resolution 2593 on the situation in Afghanistan.

The Resolution demands that Afghan territory not be used to threaten and attack any country or to shelter and train terrorists or plan and finance terrorist acts.

It also addresses India’s immediate concerns about facilitating travel from Afghanistan, including Kabul Airport. This will cover Indian nationals stranded in the country as well as Afghan nationals (including minorities) who wish to travel to India.

It is also significant that the Resolution has declared that the Security Council decides to remain seized of the matter.

“We believe that this decision by the UN Security Council has an important bearing on the course of developments in Afghanistan. It is a matter of satisfaction that our Presidency could contribute to serious international consideration of this key issue, persons familiar with the development said on the condition of anonymity.

India has been in continuous touch over the last few days with key members of the UNSC on this matter. This issue was the subject of External Affairs Minister S Jaishankar’s phone conversation with Secretary Blinken and high-level official contacts with other members, persons familiar with the development said.

There have been three earlier Statements by the UNSC on Afghanistan this month on August 6, 16 and 27.

As the President of the UNSC, India felt it important that given the seriousness of the situation, there should be a Security Council Resolution.

Earlier, in view of the evolving situation in Afghanistan, Prime Minister Narendra Modi had directed that a high-level group comprising of EAM S Jaishankar, NSA Ajit Doval and senior officials focus on the immediate priorities of India.

This group has been meeting regularly over the last few days. It is seized of issues pertaining to the safe return of stranded Indians, the travel of Afghan nationals (especially minorities) to India, and assuring that the territory of Afghanistan is not used in any manner for terrorism directed against India.

This group, as per sources, has been closely monitoring the ground situation in Afghanistan and international reactions.