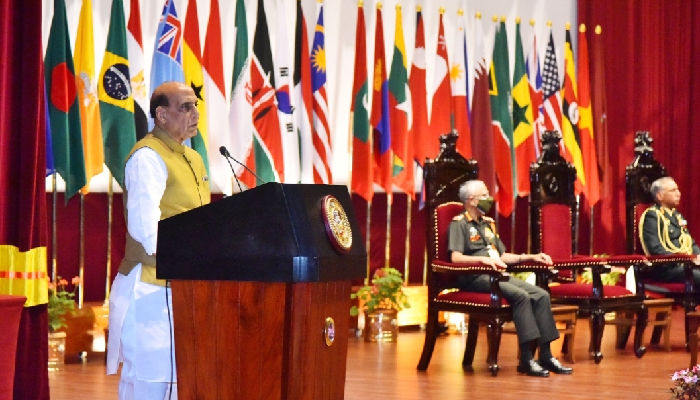 The security forces were fully committed to face any enemy, at any time, in any situation, Rajnath Singh said

The cross-border strikes on terror camps changed the reactionary mindset into a proactive mindset and defined a new era of national security in India, Defence Minister Rajnath Singh has said.

“Despite the challenges on India's border, the people are now confident that there will be no compromise on national security," Singh said in his keynote address at Defence Services Staff College, Wellington on Sunday.

There was a strong belief that India would not only end terror on its own land, but if needed, it would not hesitate to end terrorism anywhere else, he said, in a clear reference to Pakistan.

"This change defines a new era of national security in India,” he pointed out.

Terming the situation in Afghanistan as challenging, the Defence Minister said the changing equations have forced every country to think on its strategy. “QUAD, a group of India, Australia, America and Japan, has been formed under this background,” he added.

Referring to the 2020 Galwan Valley incident, the Raksha Mantri said the unilateral attempt to change the status-quo at the Northern border was also dealt with a new dynamic.

“Our soldiers displayed bravery as well as restraint, when required, to thwart enemy plans,” he said, lauding the exemplary courage of the Indian Army personnel, under the leadership of Chief of Army Staff General M M Naravane, for effectively dealing with the situation at the Northern border.

He assured the nation that the security forces were fully committed to face any enemy, at any time, in any situation and protect the country in every way.

During his address, he pointed out that India, despite its capabilities, has never attacked any country till date and has always considered the whole world as its family.

This is the spirit of our neighborhood first policy, he said, adding that India has always been proactive in helping the neighboring countries in humanitarian relief work during disasters.

He, however, made it clear that while India believes in peace, it has always been ready at all fronts to protect the self-respect and interest of its people and ensure their security. He reiterated the Government’s resolve to protect the country from all kinds of external and internal threats.

“We will continue to strengthen our military and ensure that we are a step ahead to deal with any challenges arising out of the changing global security environment,” he added.

Sharing his insights on cyber warfare and biological attacks, Singh said the perception of linking national security to geographical boundaries has changed and the alignment & re-alignment of global powers add to the already changing security challenges.

He stated that the Government is making all efforts to develop capabilities to deal with these new and emerging threats to national security.