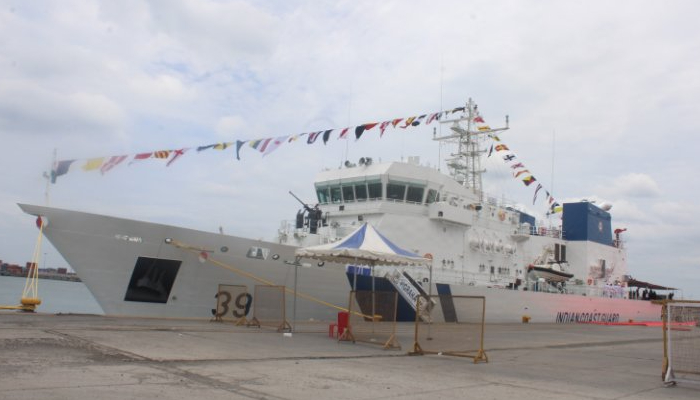 The vessel is armed with a 40/60 Bofors gun and fitted with two 12.7 mm Stabilised Remote Control Gun with Fire Control System

The 98 meters offshore patrol vessel (OPV) has been designed and built indigenously by Larsen & Toubro ShipBuilding and is fitted with advanced technology Radars, Navigation and Communication Equipment, Sensor and Machinery capable of operating in tropical sea conditions.

The ship is designed to carry one twin engine helicopter and four high speed boats for Boarding Operation, Search and Rescue, Law Enforcement and Maritime Patrol.

The ship is also capable of carrying limited pollution response equipment to contain oil spills at sea. The ship displaces approx. 2200 tons (GRT) and is propelled by two 9100 KW diesel engines to attain a maximum speed of 26 knots with endurance of 5000 nm at economical speed.

The ship, on joining the Coast Guard Eastern fleet, will be deployed extensively for EEZ surveillance and other duties as enshrined in the Coast Guard Charter, to safeguard the maritime interests of India.

The Indian Coast Guard with this ship joining the fleet, will have 157 Ships and 66 Aircraft in its inventory.

Calling it one of the important steps towards “Atma Nirbhar Bharat”, the Defence Minister said the newly commissioned vessel is indigenous from its design conception to development.

Rajnath Singh also highlighted that for the first time in the history of Indian defence, contracts for not one or two, but seven vessels have been signed with a private sector company.

The Defence Minister recalled the Coast Guard’s role in extending help to neighbouring countries in line with the spirit of inclusiveness.

The Defence Minister also commended the efforts of the Coast Guard for its assistance provided to Mauritius during oil spills from the 'Wakashio' motor vessel.

On the occasion he also lauded the efforts of Coast Guard towards realising the vision of SAGAR (Security and Growth for All in the Region) envisaged by the Prime Minister with focus on spirit of friendship, openness, dialogue and co-existence with the neighbours with keen sense of duty as its core.

The Ship will be based at Visakhapatnam and operate on India's Eastern Seaboard under the Operational and Administrative Control of the Commander, Coast Guard Region (East).

ICGS Vigraha is commanded by Commandant PN Anoop has a complement of 11 Officers and 110 men.