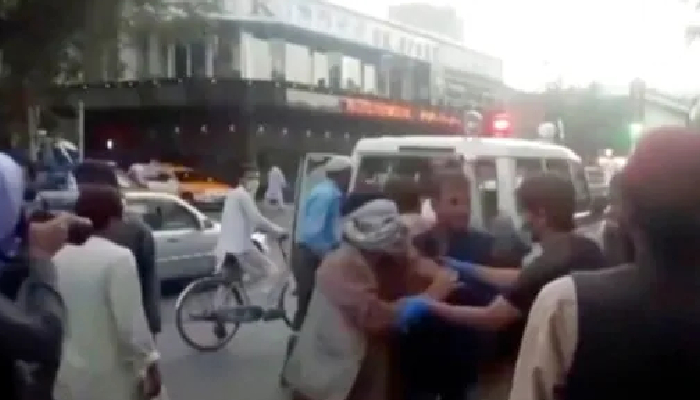 The US which has been at the helm of evacuation efforts of its own nationals and at the Hamid Karzai International Airport in Kabul was among the first to react over the blasts in which at least 13 American troops were killed.

US President Joe Biden vowed to hunt down those behind the suicide bombings.

“We will not forgive. We will not forget. We will hunt you down and make you pay,” Biden exclaimed in an address from the White House during which he said the evacuations would continue until August 31.

“We will not be deterred by terrorists. We will not let them stop our mission. We will continue the evacuation” of vulnerable people, he said.

President Biden added that there remained an “opportunity for the next several days, between now and the 31st, to be able to get them out.”

He further said that, “Knowing the threat, knowing that we may very well have another attack, the military has concluded that that’s what we should do. I think they are right.”

Gen. Frank McKenzie, Head of US Central Command told the media that “We are working very hard right now to determine attribution, to determine who is associated with this cowardly attack. And we’re prepared to take action against them.”

Sounding the US resolve to bring the perpetrators of the blasts to justice, he said attacks would not stop the United States from evacuating Americans and others from Afghanistan.

He informed there was a large amount of security at the airport, and alternate routes were being used to get evacuees in. In addition to the many Afghans, the State Department estimated there were as many as 1,000 Americans in Afghanistan who may want help getting out.

Joining the international community in condemning the bomb blasts in Kabul, India called upon the world to stand unitedly against terrorism and all those who provide sanctuaries to terrorists.

“India strongly condemns the bomb blasts in Kabul today. We extend our heartfelt condolences to the families of the victims of this terrorist attack. Our thoughts and prayers also go out to the injured,” the MEA said.

It continued, “Today’s attacks reinforce the need for the world to stand unitedly against terrorism and all those who provide sanctuaries to terrorists.”

Denouncing the attack as ‘barbaric’, UK Prime Minister Boris Johnson paid tribute to the ‘phenomenal effort’ of those involved in the evacuation operation. He added that Britain would “keep going up until the last moment”.

French President Emmanuel Macron also pledged to see the evacuations ‘through to the end’. He offered ‘his condolences to the families of the American and Afghan victims’ and saluted ‘the heroism of those who are on the ground to carry out the evacuation operations’.

Canadian Prime Minister Justin Trudeau, pledged to work with partners to resettle refugees in his country.

“Our hearts break for the people of Afghanistan and the loved ones of the victims, including the brave women and men of our allies,” Trudeau said.

Meanwhile, NATO Secretary General Jens Stoltenberg said, “Our priority remains to evacuate as many people to safety as quickly as possible.”

World Health Organisation Chief Tedrros Adhanom Ghebreyesus said in a tweet “Civilians must be protected. WHO is on the ground in Afghanistan and ready to support health facilities to treat the wounded.”

Among the Middle East nations Saudi Arabia’s Foreign Ministry rejected the attacks as “incompatible with all religious principles and moral and human values.”