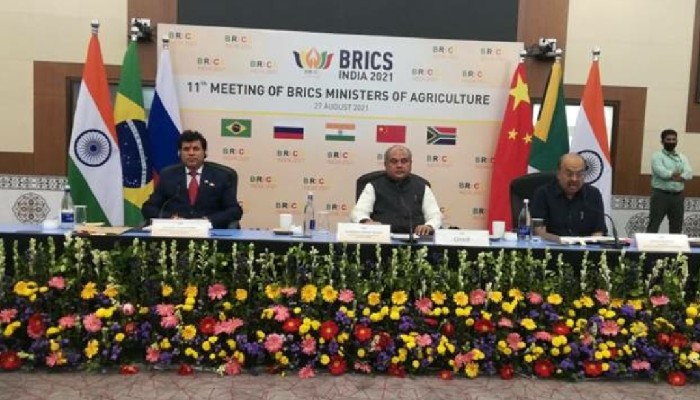 BRICS countries to play a leading role in achieving the 2030 sustainable development goals of eradicating hunger and poverty: @nstomar

Description: It will help in addressing the issues of world hunger, undernutrition, poverty and inequality

The BRICS- Agricultural Research Platform, a global platform for science-led agriculture, was operationalized on Friday.

The platform has been prepared and set up in India for strengthening cooperation in the field of agricultural research & innovations amongst the BRICS member states.

Operationalization of the platform was announced by Union Minister for Agriculture and Farmers Welfare Narendra Singh Tomar.

The Minister was addressing the 11th meeting of BRICS (Brazil, Russia, India, China, South Africa) Agriculture Ministers virtually under the theme of BRICS Partnership for Strengthening Agro Biodiversity for Food Security and Nutrition.

According to an official press release, the BRICS- Agricultural Research Platform will help in addressing the issues of world hunger, undernutrition, poverty and inequality by promoting sustainable agricultural development through strategic cooperation in agriculture and allied sector.

The BRICS-ARP has been operationized to intensify cooperation in the areas of agricultural research, technology, policy, innovations and capacity building including technologies for smallholder farming and to sustainably increase yields and farmers income in the BRICS member countries.

The platform shall escalate the exchange of research findings and innovation and best practices for upscaling in the respective BRICS Nations.

In his address, Tomar stated that agrobiodiversity has a prime role in addressing the food security and nutrition and developing the resilient agri-food systems.

He appreciated the efforts of all the BRICS Nations for promotion and conservation of agrobiodiversity and addressing food security during COVID-19 pandemic.