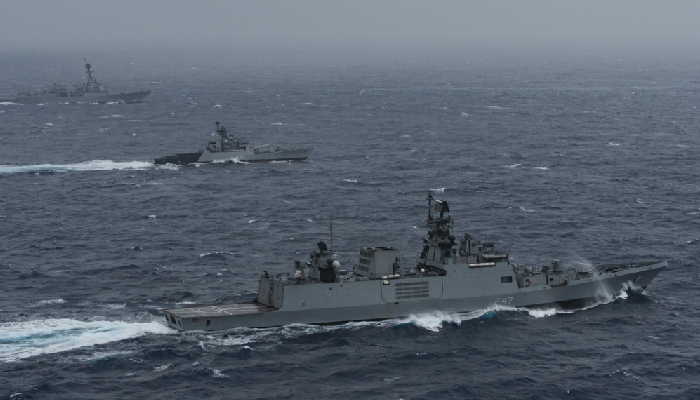 The navies of Quad countries — India, the US, Australia and Japan — are participating in the "sea phase" of Malabar-21 naval exercise from Thursday. The sea phase of the exercise is being conducted from August 26-29.

Malabar-21 will witness complex exercises including anti-surface, anti-air and anti-submarine warfare drill, and other manoeuvres and tactical exercises, the Ministry of Defence said.

The exercise will include high-tempo exercises conducted between Destroyers', Frigates, Corvettes, Submarines, Helicopters and Long Range Maritime Patrol Aircraft of the participating navies.

The exercise is a testimony to the synergy between the participating navies and a shared vision for a free, open and inclusive Indo-Pacific region, the defence ministry noted.

The harbour phase of the Malabar naval exercises was scheduled from August 21 to 24 in Guam, US.

The exercise will provide an opportunity for participating navies to derive benefit from each other’s expertise and experiences. The conduct of the exercise is observing health protocols during the COVID-19 global pandemic.

The Malabar series of Exercises are aimed at increasing the interoperability of naval powers of the four countries of the Quad. The ultimate goal of joint naval manoeuvres in these exercises is the demonstration of the capability of Quad Nations in maritime domain.

The Malabar series of maritime exercises commenced in 1992 as an IN-USN Exercise. In 2015, JMSDF joined Malabar as a permanent member. The 2020 edition witnessed participation of the Royal Australian Navy.

This year marks the 25th edition of Ex Malabar, being hosted by USN in the Western Pacific.